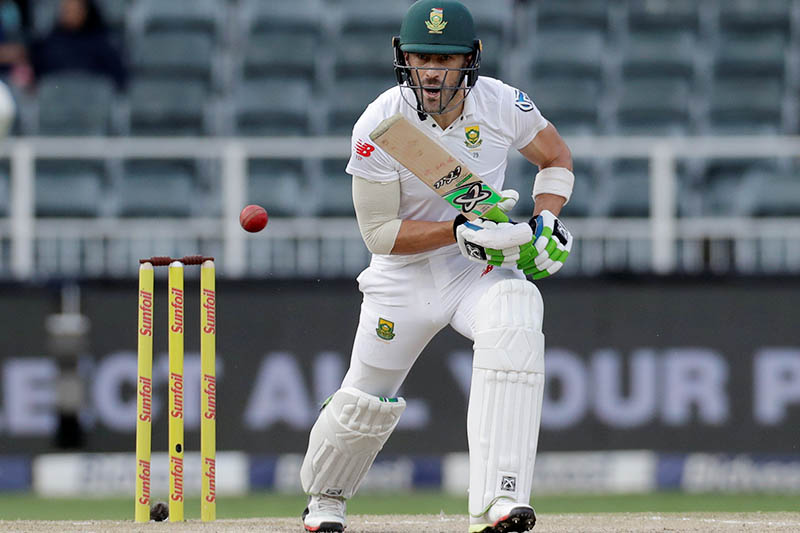 DURBAN: South Africa captain Faf du Plessis struck a stylish unbeaten half-century as they extended their second-innings advantage over Sri Lanka on the third day of the first test, reaching lunch on 227 for five at Kingsmead on Friday.

The home side lead by 271 runs and will look to push towards 350 in the afternoon session, which would be a potentially match-winning total against a Sri Lankan side that has not passed 300 in any of their last 12 test innings.

Du Plessis (72 not out) will resume with Vernon Philander (12 not out) on a wicket that is starting to take turn and has provided seam movement all match for the quicker bowlers.

The only wicket to fall in the first session was that of Quinton de Kock (55) after he put on a quick 96 in 24 overs for the fifth wicket with Du Plessis before being trapped leg before wicket by spinner Lasith Embuldeniya (3-51).

De Kock added to his first innings score of 80, and a century in the team’s last test against Pakistan, as he continues to be a solid performer in an otherwise brittle South African top-order.

South Africa posted 235 in their first innings before bowling Sri Lanka out for 191, a first-innings lead of 44 runs.

The second and final test of the series will be played in Port Elizabeth from Feb. 21-25.

South Africa started their season with a home 3-0 whitewash of Pakistan to move up to number two in the International Cricket Council's test rankings.