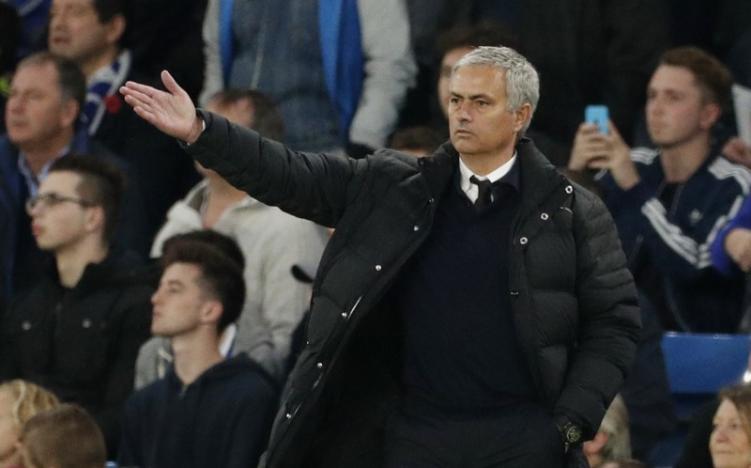 Manchester United manager Jose Mourinho. Reuters
Any suggestion that Wednesday's EFL Cup showdown between Manchester United and City would lack the usual derby intensity has been removed by the gathering pressure on both managers. While Jose Mourinho seeks a response to the humiliation inflicted on United by Sunday's 4-0 rout at Chelsea, City's Pep Guardiola is looking to end his five-match winless run as a manager. That raises the stakes in a competition often treated with disdain by managers, and this week's fourth-round fixture list of the re-branded League Cup also pairs traditional heavyweights Liverpool and Tottenham Hotspur on Tuesday and West Ham United and Chelsea on Wednesday. But it is Old Trafford where most interest will be focused on a game that Mourinho has admitted he does not want. "I would prefer to play in the Premier League," said the Portuguese, who is keen to rectify a run of just one win in six league games. "We are really, really sad but again this is not for kids, this is for men and tomorrow we have to be men and work for the next one." After Sunday's game, United's players faced multiple criticism, from lack of effort in midfield, with world-record signing Paul Pogba a particular target, to being too keen to swap shirts with opponents at the end. Mourinho will make changes for City, who have already won 2-1 at Old Trafford in the Premier league this season, with midfielders Michael Carrick and Henrikh Mkhitaryan, and the underused Wayne Rooney, if fit, pressing for inclusion. In defence, Eric Bailly's knee ligament injury means a likely start for Marcos Rojo. City, too, know the importance of victory after five games without a win. Guardiola was so unhappy with Sunday's 1-1 draw with Southampton that he kept the team in the dressing room for 45 minutes to deliver his post-match verdict. "We were drinking Coca-Cola and red wine," he said cryptically. "We were together, we spoke, but nothing special. We spoke about what is the situation." When the teams met in the league, Mourinho looked to hit City on the break, tactics he seems unlikely to repeat this time. "Both teams have to go for it," said former United midfielder Ray Wilkins on Sky Sports. City's Belgian international Kevin De Bruyne looks likely to miss the game with a thigh injury. Last season City won the trophy by beating Liverpool on penalties at Wembley, and Jurgen Klopp's side will be looking to go one better this time round as they seek their first trophy since winning the League Cup for a record eighth time in 2012. Spurs, mindful of their Champions League commitments, have not fielded their strongest side in the competition this season and will rest players again at Anfield. Chelsea will also make changes for their first ever visit to West Ham's London Stadium, with John Terry a likely starter after six weeks out with an ankle injury. In his absence, manager Antonio Conte has employed a 3-4-3 formation, which Terry is known to dislike, and Chelsea's captain faces a battle to win back a regular place ahead of Gary Cahill, David Luiz and Cesar Azpilicueta. Wednesday's other game pits the Premier League's form team, Southampton against strugglers Sunderland, while Arsenal entertain Reading and fellow Championship side Bristol City will fancy an upset against Hull City.
#Manchester United #Manchester City #Pep Guardiola #Jose Mourinho
You May Also like: