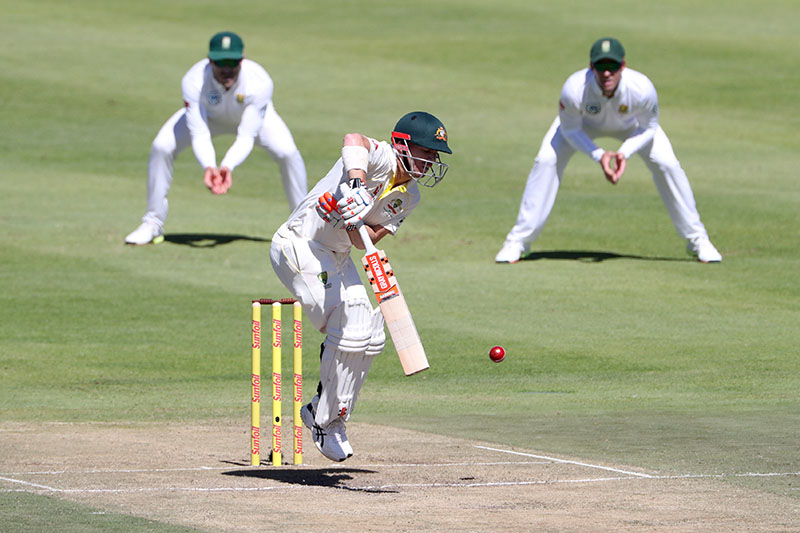 Australia's David Warner in action. Photo: Reuters
CAPE TOWN: Opener Dean Elgar carried his bat for an unbeaten century as South Africa were bowled out for 311 on the second morning of the third test against Australia, before the hosts restricted the visitors to 67 for two at lunch on Friday. Elgar was left stranded on 141 not out after he ran out of partners but his efforts helped the home side add 45 runs to their overnight score of 266-8. Australia made a brisk start to their reply, despite the loss of the two wickets, and will continue after the interval with opener Cameron Bancroft on 22 and captain Steve Smith on four at the wicket. David Warner took the attack to the home bowlers at the start of Australia's innings, racing to 30 off only 13 balls as he targeted Kagiso Rabada, but the paceman got his revenge with a superb delivery that cannoned into the top of off-stump. Warner appeared to have a verbal altercation with a spectator as he climbed the steps to the dressing room, briefly stopping to engage in what looked like a heated exchange. Usman Khawaja's poor series continued when he attempted a hook off Morne Morkel in the penultimate over before lunch and was caught at fine leg by Rabada for a laboured five. That wicket took Morkel to 298 in test cricket having announced before the four-match series began that he would retire from the international game at its completion. Rabada then bowled a fiery over at Smith, with one particularly spiteful delivery delighting the crowd after the pair were involved in the now infamous shoulder bump incident in the second test in Port Elizabeth. The loss of the two wickets for Australia leaves the test in the balance after they dismissed South Africa for what looks a par score in their first innings. Elgar and Rabada earlier took their ninth wicket partnership to exactly 50 before the latter edged a Nathan Lyon (2-43) delivery to Steve Smith at slip. Four balls later, the spinner repeated the dismissal as Morkel (4) was also gobbled by Smith, a fifth catch of the innings for the Australian captain to equal the most ever in test history, one of 11 outfield players to achieve the feat. The series is level at 1-1 with the final match to be played in Johannesburg. READ ALSO:
#Australia #South Africa #Dean Elgar #TEST MATCH CRICKET
You May Also like: