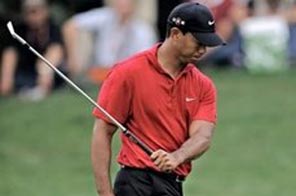 MELBOURNE: Australian officials Tuesday said scandal-hit golfer Tiger Woods was welcome back any time after his November visit delivered a 34 million dollar (31 million US) boost to the local economy.
Victoria's state government made the comments after a number of high-profile sponsors dropped the world number one following revelations over a string of extra-marital affairs.
"We have made it clear that Tiger is welcome to come play golf any time in Victoria," tourism and events minister Tim Holding said.
"He has obviously made some announcements about his golfing future -- we respect that and we respect his privacy."
Woods drew thousands of fans as he swept to victory at November's Australian Masters, his last tournament before a mysterious Florida car crash brought the affairs to light and prompted him to take a break from golf.
Victorian taxpayers forked out 1.5 million Australian dollars to lure the megastar to Melbourne but were rewarded by a 34 million dollar fillip in ticket sales, hotel and restaurant bookings and taxi and retail receipts.
Swiss watchmaker Tag Heuer and Gillette have both dropped Woods from ad campaigns, while consulting firm Accenture ended a six-year sponsorship deal.
Australian media have said Woods' alleged mistress Rachel Uchitel was also in Melbourne during the Masters tournament.

#Embattled Tiger Woods welcomed to visit Australia
You May Also like: