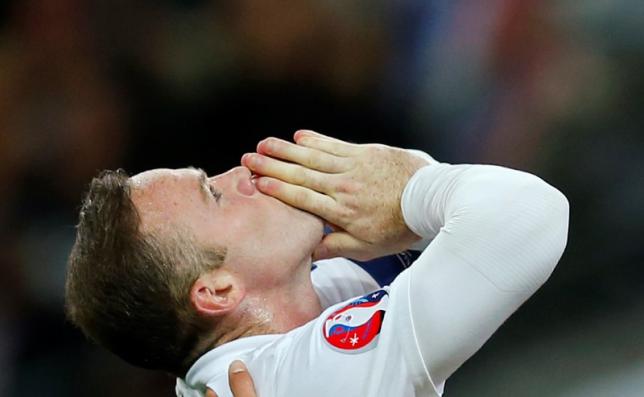 Wayne Rooney celebrates with Harry Kane after scoring the second goal for England from the penalty spot and becoming England's all time leading goalscorer. Reuters

LONDON: Wayne Rooney was overcome with emotion after becoming England's all-time record scorer when he smashed home his 50th goal with an 84th minute penalty in a Euro 2016 qualifier against Switzerland at Wembley on Tuesday.

The England skipper, who scored from the spot after Granit Xhaka had fouled Raheem Sterling, has now passed the mark of 49 goals established by Bobby Charlton in May 1970.

The FA presented the 29-year-old with a replica shirt with "Rooney 50" on the back in the dressing room after the 2-0 win secured top spot in Group E for already-qualified England.

Charlton will be invited to present fellow Manchester United great Rooney with a golden boot to mark the record before England's next home match against Estonia in October.

Asked to describe his feelings, Rooney, who equalled Charlton's record also with a penalty away to San Marino on Saturday, said: "It's a great feeling obviously.

"I've known I've been close to it for the last few England games and to finally do it is a dream come true and as you've probably seen I was a bit emotional out there.

"It's a huge honour and something I'm extremely proud of and happy it's done and hopefully I can kick on from here and concentrate now again on the team and hopefully success in the future," he told ITV.

"I am pleased its out of the way because now I don't have to keep on being asked questions about it."

Rooney blasted his penalty past Yann Sommer making sure he hit it with enough venom to give the Swiss keeper no chance.

"It was a big moment for me and I just picked my corner and put my boot through it to get as much power on it as possible and make it hard for the goalkeeper and the keeper got a touch and thankfully it had too much power so I'm grateful for that.

Asked where it ranked in a career in which he has won five Premier League titles and the Champions League, he said: "It's right up there if not the best to be your country's all-time leading goalscorer before the age of 30.

"It's something I could never have dreamt of. I'm extremely proud tonight."

Rooney praised England manager Roy Hodgson for helping him achieve his milestone after taking over the job in 2012.

"Since Roy's come in I've scored a lot of goals and I'm grateful to him for letting me play with the freedom which I've enjoyed," he said.

Hodgson, whose side were the first to qualify for next year's finals in France, told a news conference: "I am pleased we won, I am pleased Wayne broke the record and I am pleased Harry Kane scored the other goal.

"I don't think Wayne will stop here either. We play about 10 games a year now, maybe more, and I think he can play at least another 30 games for England and, at his rate of scoring, maybe get another 10 or 15 goals. I don't think he has finished yet."

#Switzerland #Wayne Rooney #England #Euro 2016 qualifier
You May Also like: