Europe will not detract from Liverpool league focus 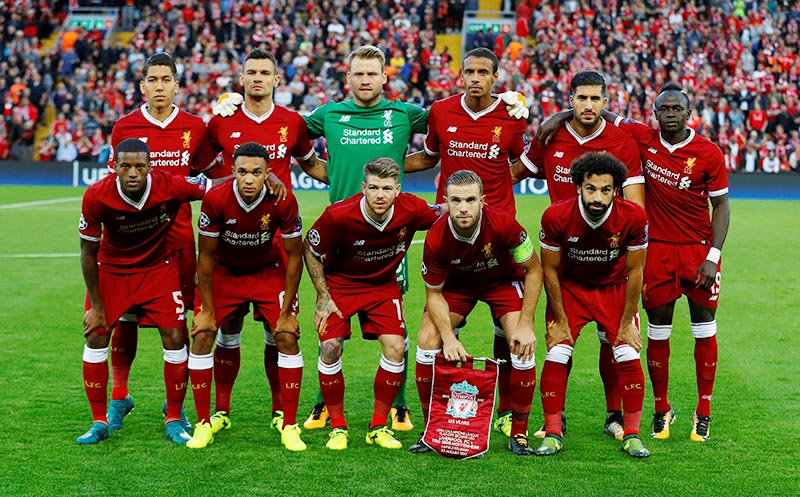 Liverpool pose for a team group photo before the match. Photo: Reuters
LONDON: Liverpool's Champions League run will not be prioritised over their push to finish as high as they can in the Premier League, captain Jordan Henderson said ahead of Saturday's trip to basement side West Bromwich Albion. The Merseyside club are in contention to reach the Champions League final for the first time since 2007 when they take on Italy's AS Roma in the semi-finals, with the first leg to be played at Anfield on Tuesday. Liverpool are close to securing a top-four finish in the with the club third in the standings with four games remaining but Henderson says Juergen Klopp's team will continue to target more victories. "It's really important to not only finish in the top four, but to finish as high up in the league as we can," midfielder Henderson told Liverpool's website http://www.liverpoolfc.com. "It's still a big focus of ours to concentrate on, to aim to finish as high up as we can. "It's very important (to stay focused). Just keep doing what we've been doing, keep working hard on the training field and keep putting that into games. Putting in good performances and getting good results is the most important thing. "No matter whether it's Premier League or Champions League, we always want to win. It's a big couple of weeks for us." West Brom's shock 1-0 win at Manchester United helped the Baggies reduce the deficit to 17th-placed Swansea City to nine points and Henderson is anticipating another fiercely contested match as the hosts continue their fight to avoid relegation. "It'll be tough, they're fighting to stay in the league. They'll give everything and the crowd will be behind them," England international Henderson added. "They've just had a positive result against United, which maybe no-one really expected, so they'll be raring to go and a little bit more confident." West Brom held Liverpool to a 0-0 draw in the reverse league fixture this season and also knocked Klopp's team out of the FA Cup in the January.
#Champions League #English Premier League #Liverpool FC #West Bromwich Albion #Juergen Klopp
You May Also like: