F1 turns out in force to pay respects to Bianchi 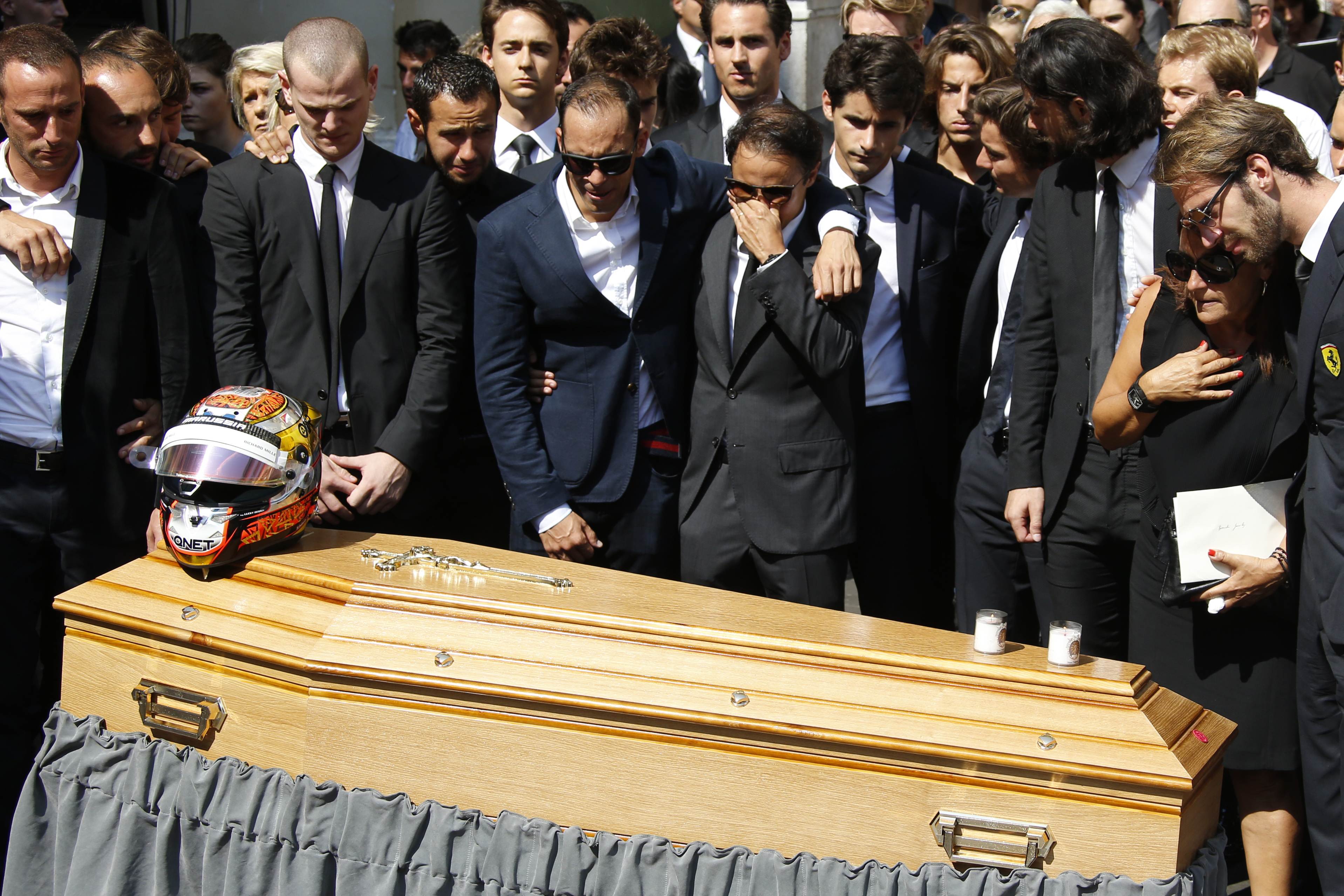 Formula One drivers, friends and relatives stand by Jules Bianchi's coffin after his funeral ceremony in Nice on Tuesday. Photo: AFP
Nice, July 21 Formula One turned out in force on Tuesday to pay its last respects to Jules Bianchi at the 25-year-old French driver’s funeral in his hometown of Nice. World champion Lewis Hamilton and many of Bianchi’s pitlane colleagues joined family and friends of the talented young Marussia driver who died in Nice on Friday, nine months after his devastating accident at the Japanese GP. Two giant portraits of Bianchi adorned the walls either side of the cathedral’s main entrance. His coffin, with his No 17 helmet resting on it, was carried from the hearse into the cathedral by a group of young drivers, described by Father Sylvain Brison as Bianchi’s “racing brothers”. With The Eagles’ haunting 1970s anthem “Hotel California” playing in the background, the coffin was carried up the cathedral’s central aisle. Hamilton and his Mercedes teammate Nico Rosberg, as well as Jean Todt, head of F1’s governing body, the FIA, and French Sports Minister Thierry Braillard, were in attendance for what Bianchi’s parents had requested was to be an intimate farewell to their son. “Jules’ death is deeply unjust,” Father Brison told the mourners in the Sainte-Reparate Cathedral situated in Nice’s historic old town. “He was happy, because he had turned his dream into reality.” F1 “was his life, his vocation. He was a champion blessed with a rare talent, as well as being a young man whose stature was as high as the depth of his humility”. The service ended with the playing of the tender 1980s classic hit “Mistral Gagnant” by French singer Renaud. Sebastian Vettel, the four-time former world champion, helped carry the coffin out of the cathedral in a poignant reminder that if fate had not cruelly intervened Bianchi would have joined the German as Kimi Raikkonen’s replacement at Ferrari next season. Bianchi was the first F1 driver to die as a result of a racing accident since triple world champion Ayrton Senna in San Marino in 1994. And Senna’s arch-rival, Alain Prost, was among the mourners as were Romain Grosjean, Felipe Massa and Olivier Panis.
#Lewis Hamilton #All India Football Federation (AIFF) #Formula One #Jules Bianchi #earthquake-ravaged #international football friendly match #Balewadi Sports Complex #AIFF General Secretary Kushal Das #funeral #racing accident
You May Also like: