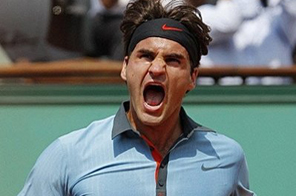 PARIS: Roger Federer rallied from a two-set deficit to keep his French Open bid alive.
Less than 24 hours after nemesis Rafael Nadal was eliminated, Federer outlasted Tommy Haas 6-7 (4), 5-7, 6-4, 6-0, 6-2. The French Open is the only major event Federer has yet to win. He has been beaten by Nadal at Roland Garros four years in a row, the past three times in the final. But with the path cleared of the No 1-ranked Nadal, No 2 Federer struggled to take advantage.
The erratic form that has plagued Federer was again a problem for portions of the first three sets. But with the center-court crowd firmly behind the Swiss star, he mounted a comeback that had his fans roaring. Federer won nine consecutive games to even the match and swept the final five games. He hit a service winner on match point, then leaped and screamed in jubilation.
The victory was the fifth of his career after trailing by two sets. The five-set match was his first at Roland Garros since 2001, and he improved to 14-12 in five-set matches. For the fourth year in a row, Federer is trying to become only the sixth man to win all four major championships. His total of 13 Grand Slam titles is one shy of Pete Sampras’ record.
As was the case because of Nadal’s loss on Sunday, other results became a footnote. Serena Williams dispensed with any drama, extending her Grand Slam winning streak to 18 by beating Aleksandra Wozniak 6-1, 6-2. It was a straightforward victory, in contrast to Williams’ previous match, when she accused her opponent of cheating and had a coughing fit during a changeover.
Somehow Federer managed to lose the opening set despite winning every service point — 24 in a row-until the tiebreaker. The first break put him ahead 2-1 in the second set, but he gave it back, then hit several nervous points serving at 5-6 to lose that game and dig a deep hole.
Haas led 4-3 in the third set and was a point from serving for the match, but Federer hit a forehand winner and went on to hold. Haas had a 40-15 lead in the next game but made four consecutive unforced errors to drop serve for the second time.
Later, Tommy Robredo, seeded 16th, defeated Philipp Kohlschreiber 6-4, 5-7, 7-6 (4), 6-2.
On the women’s side, Williams will play No 7-seeded Svetlana Kuznetsova. The Russian, winner of the 2004 US Open, beat No 12 Agnieszka Radwanska 6-4, 1-6, 6-1. “I feel like I have nothing to lose,” Williams said. “This is when everything counts, you know. I have to pick up my level and play again a really good, strong match, especially playing somebody like Svetlana who is a great clay-court player and who moves extremely well and doesn’t do anything bad.”
Williams, seeded No 2, seeks her 11th major title and third in a row. She won last year’s US Open and the Australian Open in January.