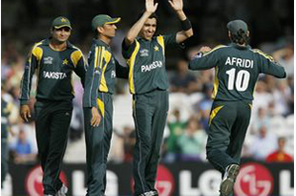 Umar Gul of Pakistan (3rdL) celebrates taking the wicket of New Zealand's Peter McGlashan during the Super 8 stage of the ICC Twenty20 Cricket World Cup at the Oval in London, England, on June 13, 2009. Source: AFP

LONDON: Umar Gul became the first bowler to claim five wickets in Twenty20 internationals as Pakistan shot New Zealand out for 99 in a must-win game at the world championships on Saturday.

Pakistan, who lost their first Super Eights match to Sri Lanka on Friday, need a win to keep their semi-final hopes alive.

New Zealand thrashed Ireland by 83 runs at Trent Bridge on Thursday and will virtually book a place in the last four if they beat Pakistan.

"It is important for me, the team and my country to perform well," said Gul.

"In Twenty20, you have to be able to bowl the yorker, bouncer and the slower ball. Now I want to be the highest wicket-taker in the tournament."

Razzaq, who last played for Pakistan in May 2007, grabbed a wicket off his fourth delivery and another one in his third over to reduce New Zealand to 37-3.

The 29-year-old was called up as a replacement for the injured Yasir Arafat after breaking links with the rebel Indian Cricket League.

Asked to open the bowling by captain Younus Khan, Razzaq had the dangerous Brendon McCullum caught at point before trapping Martin Guptill leg-before.

Gul, brought on as the sixth bowler, struck immediately as Shahid Afridi sprinted back from mid-on to catch Scott Styris (22) near the boundary.

The steady seamer claimed four of the last five wickets to leave Pakistan chasing a modest target of 5.5 runs an over.

New Zealand captain Daniel Vettori made his first appearance in the tournament following a shoulder injury, but batsman Ross Taylor again missed out with a hamstring strain.