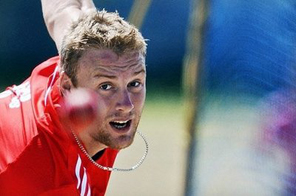 LONDON: Andrew Flintoff will help coach the United Arab Emirates national team during his rehabilitation from knee surgery, the all-rounder's agent has confirmed.
Andrew Chandler revealed the 31-year-old will base his recovery programme at the Dubai Sports City complex, and will use his time away from the treatment room to help with the development of the country's leading cricketers.
The deal will see Flintoff assisting the team on a casual basis and does not represent a formal arrangement.
"A partnership has been agreed with Dubai Sports City to use their gym and facilities as a base for his rehabilitation," Chandler said. "I believe he will be one of the first people to use them. In return he will be carrying out some coaching for the UAE national team over the next six months."
Flintoff retired from Test cricket after the Ashes victory over Australia last month. He had surgery on a troublesome knee problem three weeks ago and last week moved to Dubai, where he hopes to open a cricket academy once a suitable site is found.
"There has been good growth in UAE cricket in the last few years and Andrew felt that he wanted to give something back," Chandler said. "His partnership with Sports City will also help raise the profile of his Dubai academy.
"His children have already started at a local school. He has rented a temporary apartment near the Marina but will be looking for something more permanent over the next few weeks."
Flintoff last week snubbed an incremental contract offer from the England and Wales Cricket Board but Chandler insists his client remains committed to the national side in the shorter forms of the game.
"He has turned down an England contract but this won't make much difference as he has said he will make himself available for one-day games," he said. "He is aiming to play a role in the one-day leg of the Bangladesh tour.
"He remains committed to Lancashire and in addition to the IPL, he has been offered contracts for Twenty20 tournaments elsewhere in the world."

#Flintoff to coach UAE team during rehab
You May Also like: