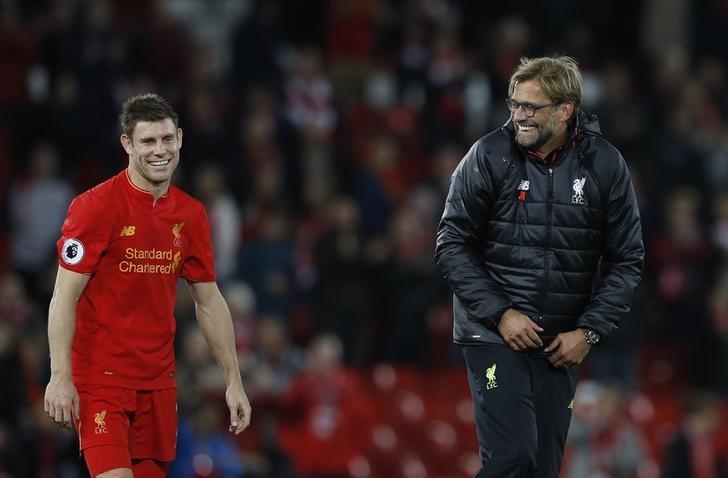 Liverpool manager Juergen Klopp celebrates with James Milner after the game. Reuters
A fluent Liverpool moved second in the Premier League with a 2-1 victory over West Bromwich Albion at Anfield on Saturday but will rue missing the opportunity to top the table. Victory by a two-goal margin would have put Juergen Klopp's side ahead of Arsenal on goals scored and when Sadio Mane and Philippe Coutinho scored in a rampant first half it looked good for the Reds. Mane volleyed in Roberto Firmino's perfectly flighted pass after 20 minutes and with Liverpool attacking in waves Coutinho then showed great footwork to collect Mane's pass and shoot past Ben Foster in the 35th minute. Foster made several saves to keep West Brom in touch before the visitors gained an unlikely lifeline in the 81st minute when Gareth McAuley volleyed home from close range. Liverpool have 20 points from nine matches but Arsenal, who drew 0-0 at home to Middlesbrough, have a marginally better goal difference, Manchester City (19) can return to the top if they beat Southampton on Sunday.
#Liverpool #West Bromwich #Juergen Klopp
You May Also like: