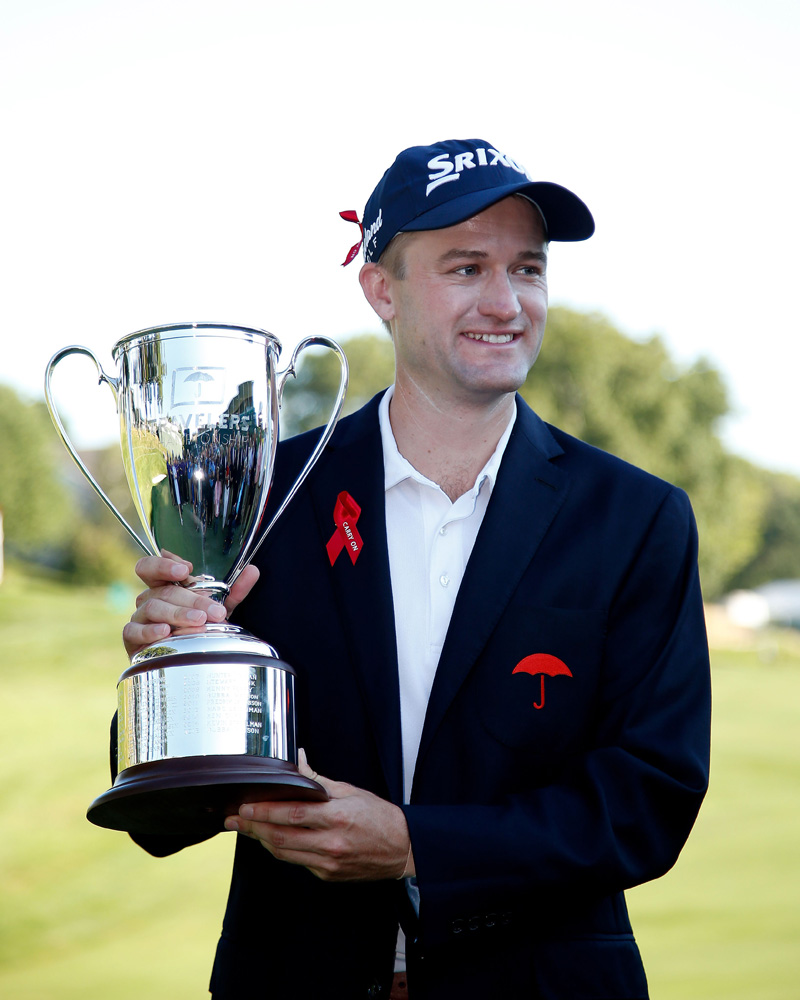 Russell Knox of Scotland poses with the trophy after winning the Travelers Championship at TCP River Highlands on August 7, 2016 in Cromwell, Connecticut. Photo: AFP
Los Angeles, August 8 Former US Open winner Jim Furyk fired the lowest single round score in PGA Tour history on Sunday by shooting a 58 during the final round of the Travelers Championship. The 46-year-old American’s 12-under round bettered the previous record of 59 which had been shot six times, including by Furyk himself. “There are a lot of rounds by a lot of great players ahead of me that have never reached 58. So to hold it on the PGA Tour is phenomenal,” Furyk said. Furyk two-putted on the 18th green after setting the nine-hole record with an eight-under 27. He shot a 31 on the back nine in his closing round. Furyk also shot the most recent 59 on the Tour at the 2013 BMW Championship. Scotland’s Russell Knox sank a 12-foot putt on his closing hole to shoot a two-under 68 and earn his second tournament victory of the season. Knox finished one stroke ahead of first round co-leader Jerry Kelly, who shot 64. Furyk, who finished tied for fifth, described his closing round as a grinding, mental struggle. “I am hitting it well. I am putting it well. It is trying to find a way to stay out of your own way, really. Don’t let any (negative) thoughts in,” he said. Furyk made six birdies and an eagle through his first nine holes of this historic round. He added birdies at the 10th, 11th and 12th. A birdie at the 12th hole was his seventh straight and he finished with a two-foot par putt on 18 at the River Highlands course in Cromwell, Connecticut. Two other professionals have recorded 58s, comprising Germany’s Stephan Jaeger on the Web.com Tour in this year’s Ellie Mae Classic and Japan’s Ryo Ishikawa on the Japan Golf Tour at the 2010 The Crowns. Furyk began the day 16 shots back of leader Daniel Berger in 70th place at one-over 211 after opening 73-66-71. He finished at 11-under 269. It was one shot off the PGA Tour’s nine-hole record of 26, set by Corey Pavin in the opening round of the 2006 US Bank Championship in Milwaukee. The last nine-hole 27 on tour was carded by Ryan Palmer at the 2015 CareerBuilder Challenge. Furyk said he realized he could accomplish something historic when he was still on the front nine. “Late on the front nine, I felt good with my short irons,” he said. Furyk, who is ranked 24th in the world, won the 2003 US Open and is a 17-time winner on the US PGA Tour. He last won at the 2015 RBC Heritage. Fellow golfer Graeme McDowell said he has great respect for Furyk. “Special round of golf there from Furyk,” McDowell tweeted. “Cool to see how emotional he was.”
#US Open #Travelers Championship #Jim Furyk
You May Also like: