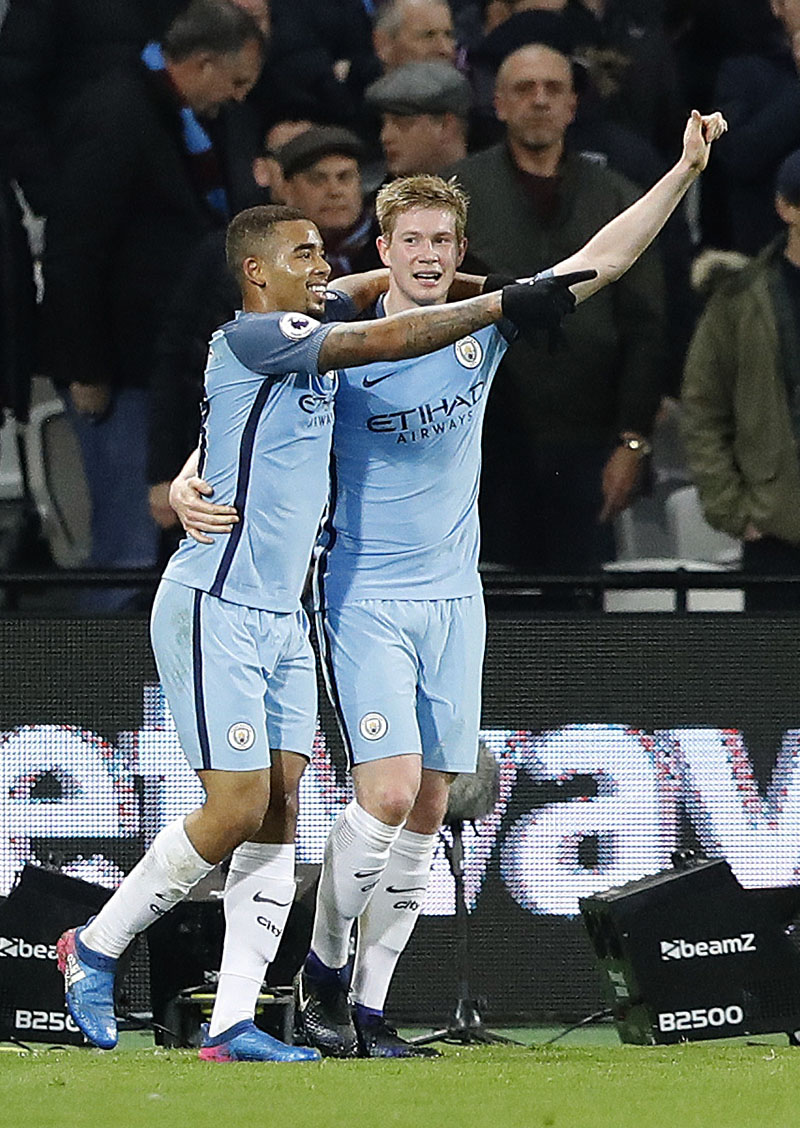 Manchester City's Gabriel Jesus (left) celebrates with Manchester City's Kevin De Bruyne after he scores a goal during the English Premier League soccer match between West Ham and Manchester City at the London stadium, on Wednesday, February 1, 2017. Photo: AP
LONDON: Marveling at the prodigious talent of Gabriel Jesus from afar, Pep Guardiola had to wait six months to discover if the Brazilian was equipped for the challenges at Manchester City. "You never know," Guardiola said back then. "It is like a watermelon. You have to open and see how it's going to turn out." Overflowing with flair and vivacity it turns out, just like he did in Brazil. City teammates have already been glowing about the 19-year-old forward's mindset and maturity. The Olympic gold medalist was signed in August for 27 million pounds ($35 million) but stayed to complete the Brazilian season with Palmeiras and only recently became eligible for City. In three appearances, Gabriel Jesus has injected a fresh dose of dynamism to the team. In his first Premier League start on Wednesday, there was a goal and an assist for Kevin De Bruyne in a 4-0 rout of West Ham. "The prospect is good," Guardiola said. "That's why we push him there because he's a young, young player, young talent." In a short space of time, Guardiola has seen how Gabriel Jesus can enrich City's high-pressing game, with his clever touches and good instinct in the penalty area. "He has a huge mentality, so aggressive," Guardiola said. "He has dreams ... to become something in the world of football and, of course, we are going to try to get it for us." Gabriel Jesus has slipped seamlessly into a talented triumvirate up front with 22-year-old Raheem Sterling and 21-year-old Leroy Sane. "They are so, so dangerous," Guardiola said. "These three guys are future of the club because their average age is 20. You cannot see in Europe another big club with strikers this young." That's clear from a glance across the continent: — Guardiola's former club, Barcelona, has Lionel Messi (29), Luis Suarez (30) and Neymar (24) leading the attack. — At Real Madrid there is Cristiano Ronaldo (31), Karim Benzema (29) and Gareth Bale (27). — Paris Saint-Germain has Lucas Moura (24), Edinson Cavani (29), Julian Draxler (23) up front. — In the Premier League, leader Chelsea has been deploying a front three of Pedro Rodriguez (29), Diego Costa (28) and Eden Hazard (26). With Guardiola extolling the virtues of youth, that might not bode well for 28-year-old Sergio Aguero. The Argentine forward had a rare night on the City bench at West Ham before going on in the second half. He might have to get more accustomed to that watching brief if Gabriel Jesus continues to thrive after making the seamless transition into English football. Guardiola, though, is already considering starting both Aguero and Gabriel Jesus. "They can play together," Guardiola said, "because Gabriel can play on the left side, in the position of Leroy." As if there was any doubt, Guardiola offered a firm assurance to Aguero. "Sergio remains so important player for us. He knows," Guardiola said. "Everybody knows that we cannot achieve our goals without his contribution." Aguero's most significant moment in a City shirt came four years before Guardiola's arrival. He netted the stoppage-time goal against Queens Park Rangers in May 2012 that clinched the club's first English title in 44 years and the first in the Premier League era. City lifted the trophy again in 2014 but is unlikely to win it again in Guardiola's first season. Not only is the Abu Dhabi-owned team 10 points behind league-leading Chelsea, but it is also out of the four Champions League qualification spots in fifth place. Chelsea manager Antonio Conte was at West Ham to witness City's win. "I think (Conte) has not to be too much worried about what he saw," said Guardiola, a title winner with Barcelona and Bayern Munich, "because they are 10 points in front ... so only Chelsea can lose the Premier League."
#Manchester City #Pep Guardiola #Gabriel Jesus
You May Also like: