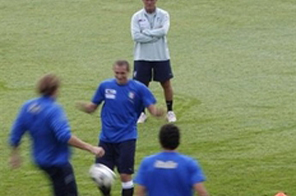 Italy's national football coach Marcello Lippi (back) watches his players during a training session on October 7, 2009 at the national technical center of Coverciano, near Florence. Source: AFP

PARIS: Footballing superpowers Italy and Germany can seal their places at the 2010 World Cup on Saturday as qualifying for South Africa enters the home straight.

England, Spain and the Netherlands are the only European countries to have already secured their tickets for next year's finals leaving six automatic places still up for grabs.
A further four countries will gain qualification through the play-offs.
World Cup winners Italy travel to Dublin to play the Republic of Ireland requiring only a point to guarantee their presence in South Africa as winners of Group Eight.
Germany are in Moscow to take on Guus Hiddink's Russia where a win for Joachim Loew's side will see them safely through from Group Four.
Portugal, semi-finalists in 2006, have struggled in Group One but victory over Hungary last month has given Cristiano Ronaldo and company an outside chance of making it.
The Portuguese are lying third and must take maximum points when they host the Hungarians in Lisbon to keep their slim hopes alive.
Denmark can seal top spot if they beat Sweden in a top-of-the-table clash in Copenhagen.
France are fighting for their World Cup lives in Group Seven.
Distant are the memories of Les Bleus' stirring journey to the 2006 World Cup final and their penalty shoot-out loss to the Italians as they lie second, four points adrift of table toppers Serbia.
Raymond Domenech's men improved their prospects of making it to South Africa with a gutsy 1-1 draw away to the Serbs last time out and can guarantee a play-off with victory over minnows the Faroe Islands.
Serbia however could be docked points should there be crowd trouble in their final two qualifiers against Romania and Lithuania.
The threat was made by FIFA after incidents during previous qualifying matches against France, Austria and Romania.
England's inspired run of eight wins out of eight has left Fabio Capello's side in the enviable position of being assured top spot in Group Six irrespective of their results against Ukraine and Belarus on Wednesday.
That's left Ukraine and Croatia in a fierce scrap for the table's runners-up spot.
Like England Euro 2008 champions Spain have coasted through Group Five leaving Bosnia-Herzegovina favourites to go into the play-offs, something they can guarantee if they beat Estonia.
The tighest table is Group Three where any one of five teams are still in contention with Slovakia needing just one point to ensure automatic qualification.
In Dublin, Ireland are facing an injury crisis with key winger Damien Duff, midfielders Steven Reid and Darron Gibson and striker Caleb Folan all out of contention for the Italy clash in Croke Park.
There is also a doubt over Aston Villa centreback Richard Dunne who was forced to sit out training on Wednesday because of a bruised ankle.
Ireland's Italian manager Giovanni Trapattoni is optimistic that the Aston Villa defender, a mainstay of the Irish side, will recover in time.
Over in Moscow Russia's artful Dutch coach Hiddink is plotting the downfall of three-time world champions Germany.
Hiddink compared Russia's task to the one they faced two years ago ahead of the deciding match with England in Moscow in Euro 2008 qualifying.
"Yes, the situation looks pretty similar but now we are more experienced team than we were two years ago," Hiddink said. "And I hope we will receive the same furious support of our fans that we had then."
Germany meanwhile are intent on wrapping up their qualification campaign with a game in hand.
Midfielder Thomas Hitzlsperger said: "Our goal is to decide the World Cup qualification places for ourselves on Saturday.
"We are all united on that: We travel to Moscow in order to win.
"We know Russia has an extremely strong team and we respect them.
"But we have already beaten the Russians and to go there standing tall as table leaders. We have every reason to be self-confident."

#Germany #Italy #close in on South Africa 2010
You May Also like: