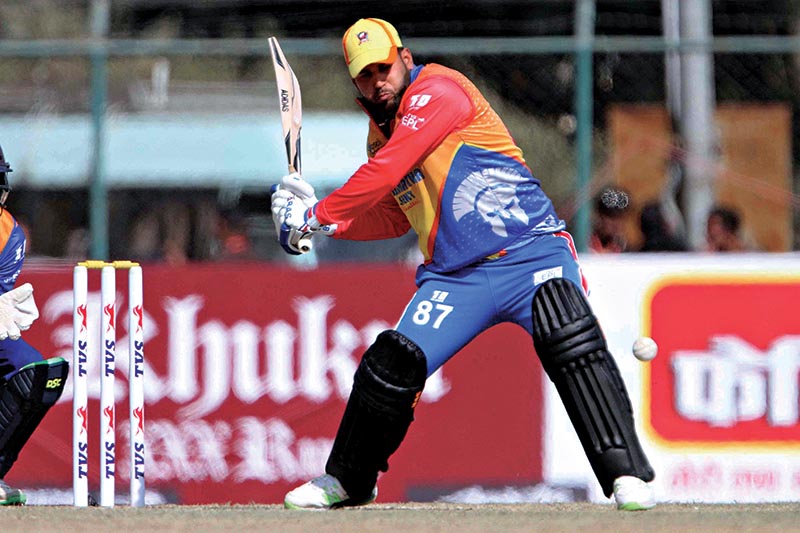 Mohammad Naveed of Bhairahawa Gladiators bats against Biratnagar Warriors during their TVS Everest Premier League match at the TU Stadium in Kathmandu on Wednesday. Photo: Udipt Singh Chhetry/ THT
Kathmandu, December 12 Bhairahawa Gladiators and Lalitpur Patriots sealed the playoffs berths following their third consecutive wins in the TVS Everest Premier League here at the TU Stadium today. Gladiators defeated Biratnagar Warriors by four wickets to make it three in three, while Patriots hammered Kathmandu Kings XI by 10 wickets for their third win after losing the opening match. Both the teams accumulated six points. Warriors have four from three matches, while Kings have two from two games. Chitwan Tigers and Pokhara Rhinos are yet to open their accounts. In the day’s first match, Warriors were all out for 91 runs in 18.4 overs before Gladiators struggled to 92-6 with two balls to spare. Warriors — who failed to chase 85-run target against Rhinos yesterday before winning in one-over eliminator — were reduced to 6-3 after skipper Paras Khadka (one), Anil Kumar Sah (four) and Babar Hayat (six) were dismissed cheaply. It soon became 39-5 and Warriors lost last five wickets for a paltry 27 runs. Only four players were able to score in double figures and the Netherlands’ Roelof van der Merwe was the top scorer with 25 off 29 balls, while Karan KC — who struck the only six of the innings — was the second best at 15-ball 18. Sumit Maharjan scored 15, while Hari Chauhan contributed 13. UAE’s Mohammad Naveed was the pick of the Gladiators bowlers taking 4-14, while Krishna Karki (2-19) and Avinash Bohara (2-18) shared four wickets between them. The Netherlands’ Ryan ten Doeschate and skipper Sharad Vesawkar claimed one wicket each. In reply, Gladiators also struggled to collect runs freely. Openers Pradeep Airee (10) and Kushal Malla (seven) returned to the pavilion with 21 runs on the board and Indian cricketer Ravi Inder Singh, the only centurion of the tournament so far, could score just 12. Ryan ten Doeschate and Vesawkar added 33 runs for the fourth wicket and Gladiators lost two more wickets in the space of two runs. But Rohit Kumar Paudel (seven) and man-of-the-match Naveed (three) took the team home without further loss. Ten Doeschate top scored with 33-ball 20, while Vesawkar scored 16. Roelof van der Merwe took 2-10 for Warriors, while Karan KC, Paul van Meekeren, Basant Regmi and Robeen Chhetri pocketed one wicket each. In another match, Patriots bowled Kings out for 109 runs in the penultimate ball and chased down the total without loss with 57 balls to spare. Patriots openers Jaykishan Kolsawala and Gaurav Tomar, both from India, took the team home with ease. Tomar hammered nine fours and five sixes in his 80 off 35 balls, while Kolsawala scored 27-ball 28 that included four boundaries. Earlier, Kings skipper Kevin O’Brien top scored for the team with 33-ball 42 hitting three fours and two sixes, while Siddhant Lohani struck one each four and six in his 21 off 25 balls. Samshad Sheikh (10) was the only other Kings batsman to score in double figures. Pawan Sarraf, who claimed the scalps of all three foreign players of Kings, was the pick of the Patriots bowlers taking 3-22 and that also earned him the man-of-the-match award. Rashaid Khan (2-17) and Yogendra Singh Karki (2-28) shared four wickets between them.
#TU Stadium #Everest Premier League #Lalitpur Patriots #Bhairahawa Gladiators
You May Also like: