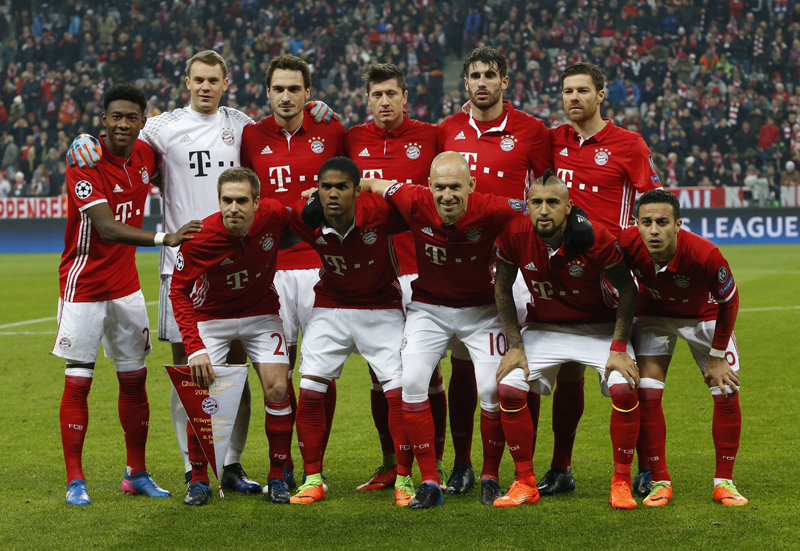 Bayern Munich team group before the match. Photo: Reuters
BERLIN: Champions Bayern Munich have beaten Hamburg SV more times than any other Bundesliga team, firing a record 232 goals past them in more than half a century of league encounters. But when the two sides meet on Saturday, the northern club, former European champions who have been battling relegation for the past few seasons, are determined to draw strength from their current three-match unbeaten run. "If the question is playing it safe in Munich or stepping on the gas then the answer is we will step on the gas," said Hamburg coach Markus Gisdol, whose team have climbed out of the bottom spots for the first time in months. "...Underestimating Bayern because of their current form and playing a high-risk game against them would be a grave mistake. Bayern are a top team with huge quality but we will be courageous." Hamburg are the only team never to have played second division football since the introduction of the Bundesliga in 1963 but they needed lucky escapes to stay up in 2014 and 2015 after relegation playoffs. Their current campaign has only recently improved and the club sits in 15th spot, a point above the relegation zone. Gisdol will most likely be without injured central defender Kyriakos Papadopoulos, who has added much-needed stability at the back since his arrival in January. "As things stand now he will not be able to play on Saturday," Gisdol said. The Bavarians are five points clear at the top of the table following their last-gasp 1-1 draw at Hertha Berlin last week. Despite their 5-1 victory over Arsenal in the Champions League days before facing Hertha, Bayern have rarely displayed similar dominance domestically this season. Coach Carlo Ancelotti, whose team are chasing a treble of titles including a record-extending fifth straight German league title, has seen defender Jerome Boateng and winger Franck Ribery return to training after injury. The pair looks set to be included in the squad for Saturday. "We are gradually playing better, we remain unbeaten this year and we want to keep that way," said keeper Manuel Neuer. Fellow Champions League representatives Borussia Dortmund, in third place on 37 points, travel to Freiburg while RB Leipzig, eight points ahead in second, host Cologne, who have lost just once in their last eight matches.
#Champions League #Bayern Munich #Bundesliga #Jerome Boateng #Hamburg #Franck Ribery
You May Also like: