Inconsistency haunts New Zealand at the end of McCullum era 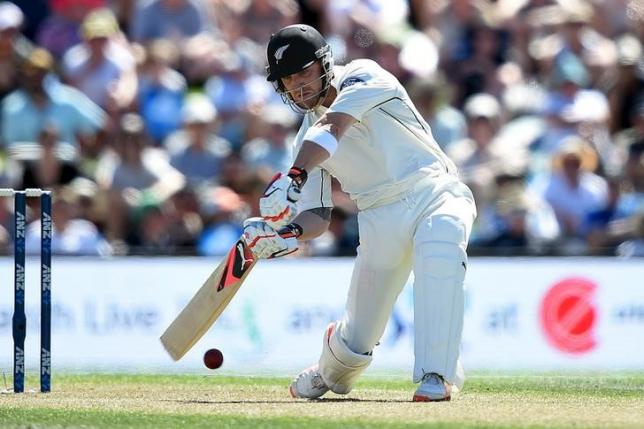 New Zealand's captain Brendon McCullum hits a boundary during the first day of the second test against Australia in Christchurch, New Zealand, February 20, 2016. REUTERS
CHRISTCHURCH: New Zealand's 2-0 series defeat on home pitches by Australia was a disappointing end to the Brendon McCullum era and showed the Black Caps have work to do if they hope to consistently challenge the top test nations. Captain McCullum bowed out of international cricket fittingly with the fastest test century in his final match, but was powerless to prevent his side from slumping to another emphatic defeat in Christchurch on Wednesday. The post-McCullum era begins in earnest at the World Twenty20 in India next month, with Kane Williamson to take the reins, but New Zealand will not be able to measure themselves against a test power until touring South Africa in a two-match series in August. Australia's win, which ended the hosts' unbeaten run in home test series dating back to 2012, highlighted a number of shortcomings. Chief among them was a lack of penetration with the ball. Opening pair Tim Southee and Trent Boult, lauded as one of the best pace duos in the world, had poor returns. Southee failed to get any swing or seam and took just three wickets at 67.33, more than twice his career average of 32.12. With his pace also down, McCullum said the bowler had work to do. "There's other guys coming through who are performing very well and it's going to push Tim to make sure he's operating at his best which we saw for a good 12-18 months," McCullum said. "He's got some challenges but I still believe he's a strong leader in the group and he's just got to smooth out some of his rough edges." Boult also failed to generate anywhere near the pace of 12 months ago, while extracting little appreciable swing. He took five wickets at 53.80. Coach Mike Hesson felt his bowlers had the worst of the pitch and conditions but also lamented their failure to get reverse swing with the older ball. Off-spinner Mark Craig was hit out of the side by Australia's batsmen, with two wickets for 153 runs in the first test at Wellington's Basin Reserve. New Zealand's top order struggled compared to their opponents and is set for a shake-up, with Henry Nicholls likely to fill McCullum's spot at number five after a handy first series at four. Tom Latham showed flashes of his potential but failed to cash in with big scores after setting platforms in both tests. Martin Guptill, however, scored just 81 runs in his four innings, renewing doubts of his credentials as a viable test opener. The 29-year-old still has issues with the moving ball but Hesson said he remained a work in progress in tests and there were no plans to drop him down the order. "Martin still hasn't quite nailed it at test level but again we think he has some good qualities," Hesson said. Those problems aside, McCullum felt he had left the team and its culture in good hands, with Kane Williamson almost certain to replace him as test captain. "If there's one criticism of us, we've probably been a little bit inconsistent with flashes of brilliance," he said. "The next stage for this team is to reach a high performing level on a consistent basis."
#New Zealand #Brendon McCullum
You May Also like: