Israeli police on alert ahead of Celtic match 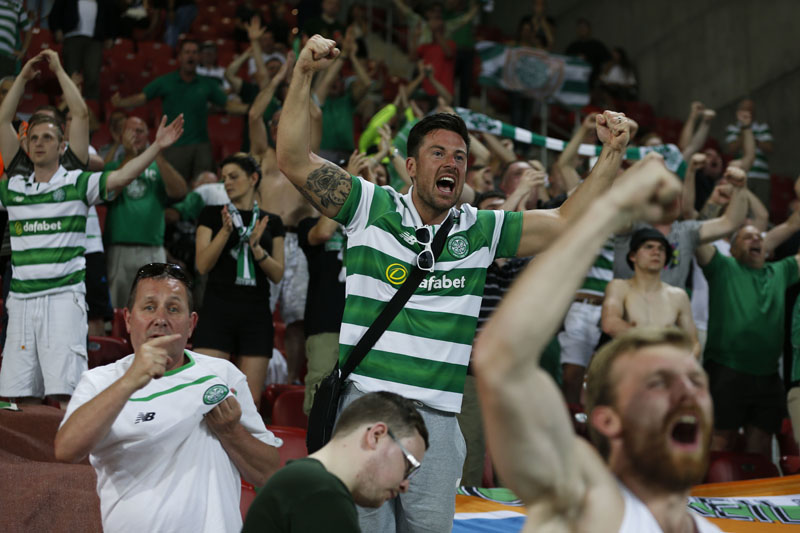 Celtic fans cheer before the the Champions League qualifying playoffs second leg soccer match in against Hapoel in Beersheba, Israel, on Tuesday, August 23, 2016. Photo: AP
JERUSALEM: Israeli police are on high alert ahead of a match between Celtic and Hapoel Beer Sheva after fans of the Scottish champions waved Palestinian flags at their last meeting. Spokesman Micky Rosenfeld says hundreds of police will be deployed in and around the stadium for the Champions League playoff match to "ensure that it is a sport event and not a political event," and that flags will be removed if necessary. Political banners and protests are banned at matches organized by UEFA, European football's governing body. On Monday, UEFA charged Celtic over fans displaying Palestinian flags at the first leg of the playoff against the Israeli team last week. Celtic fans often wave Palestinian flags at matches but many more were seen during that match. A group of Celtic fans, called the "Green Brigade," has raised more than 120,000 pounds ($160,000) in two days for two Palestinian charities after launching an appeal on a crowdfunding website. The initial aim was to raise 75,000 pounds ($100,000), the amount that Celtic fans fear their club could be fined by UEFA. Organizers of the (hashtag)matchthefineforpalestine appeal said they were "determined to make a positive contribution to the game." The team that advances after Tuesday's game goes into the elite 32-team group stage.
#Celtic #Israel-Security #Hapoel Beer Sheva #Champions League playoff #Celtic match
You May Also like: