Italy back in contention; England out of Nations League

ROME: Three years after an embarrassing failure to qualify for the World Cup, Italy is back in contention with the best in Europe. England, meanwhile, is already out of contention for the Nations League finals with one round of matches still to play. An Italy squad badly hit by the coronavirus still managed to beat Poland 2-0 on Sunday, putting the Azzurri in control of their group, while England was beaten 2-0 by top-ranked Belgium. Another win at Bosnia-Herzegovina on Wednesday will see Italy hosting the four-team finals in October -- just a few months after hosting the opening game of the European Championship in Rome. 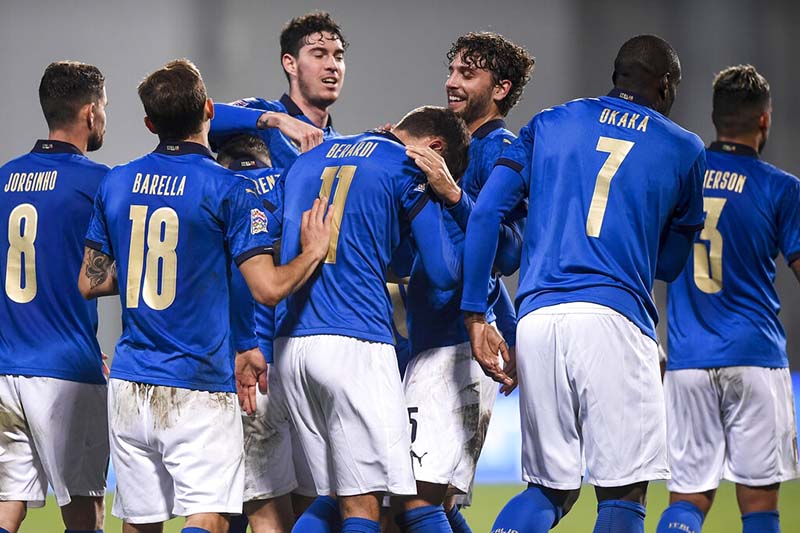 Italy's players celebrate after their teammate Domenico Berardi, center (11) scored the winning goal during the UEFA Nations League soccer match between Italy and Poland at Mapei Stadium, in Reggio Emilia, Italy, on Sunday, November 15, 2020. Photo: Fabio Ferrari/LaPresse via AP
“It’s our culture. Italians give their best during difficult moments and become more united. It’s what I asked of these guys before the game and they were extraordinary,” said assistant coach Alberico Evani, who has been standing in for head coach Roberto Mancini on the touchline. Mancini is isolating at home with the coronavirus, as is striker Ciro Immobile, the winner of the European Golden Shoe last season. In all, more than 20 Italy players were unavailable due to the virus and injury. Jorginho converted a penalty for Italy midway through the first half after Andrea Belotti was brought down inside the area. Domenico Berardi added another goal late in the second half after collecting a pass from Lorenzo Insigne. “The more days went on, the more players kept leaving the camp, but we said to ourselves that we had to be even more united through these obstacles,” Belotti said. “It was a great performance and we proved that we were superior to Poland in every way this evening. “We’re like a family, so coming back here is like a father embracing his son. That’s how we all feel when we come on international duty. We just need to look each other in the eyes to know what we’re doing,” Belotti added. “We dedicate this win to the coach, and also to everyone else who is self-isolating right now.” Italy leads Group 1 in League A with nine points. The Netherlands is next with eight points after beating Bosnia 3-1. Poland is still in contention with seven points, while Bosnia trails with two. BELGIUM NEARS FINALS Dries Mertens scored a superb free kick as Belgium ended England’s hopes of reaching the finals. Belgium took the lead 10 minutes in when Romelu Lukaku set up Youri Tielemans for a deflected shot. Mertens made it 2-0 in the 24th by expertly curling his kick over the English wall — which mostly failed to jump — after Kevin De Bruyne was fouled. Belgium leads Group 2 in League A with 12 points. Denmark is next with 10 following a 2-1 win over Iceland. England has seven and Iceland none. Belgium needs only a draw at home with Denmark on Wednesday to reach the finals. DE BOER FINALLY WINS Frank de Boer finally has his first win as Netherlands coach after Georginio Wijnaldum scored a swift brace to lead his team to a 3-1 victory over Bosnia-Herzegovina. Wijnaldum, captain in the absence of his injured Liverpool teammate Virgil van Dijk, tapped in from close range in the sixth and 14th minutes to set up the win in the empty Johan Cruyff Arena. Wijnaldum has now scored seven of his country’s last 12 goals. Memphis Depay got the Netherlands’ third goal. The victory eases pressure on De Boer, who became the first Netherlands coach not to register a win in his first four matches in charge when his team drew 1-1 with Spain on Wednesday, following a defeat and two more draws since taking over from Ronald Koeman. WINNING WALES Wales is the only unbeaten team in League B following a 1-0 win over Ireland, courtesy of David Brooks’ second-half header. Now Wales needs only to avoid defeat at home against second-place Finland to earn promotion to the top tier. “We didn’t play that well today, but we came out fighting in the second half. It’s another three points and that’s what matters and it sets up well for Wednesday,” said Wales captain Gareth Bale. “We have a great record at the moment and it’s great to get the win. I love playing for Wales, but the most important thing is that this team keeps winning.” In Group 1, Austria beat Northern Ireland 2-1 to also stay on course for promotion with four wins in five games. In League C, North Macedonia maintained its momentum after qualifying for the European Championship by beating Estonia 2-1 to lead Group 2.
#Italy #England #Belgium #Nation League
You May Also like: