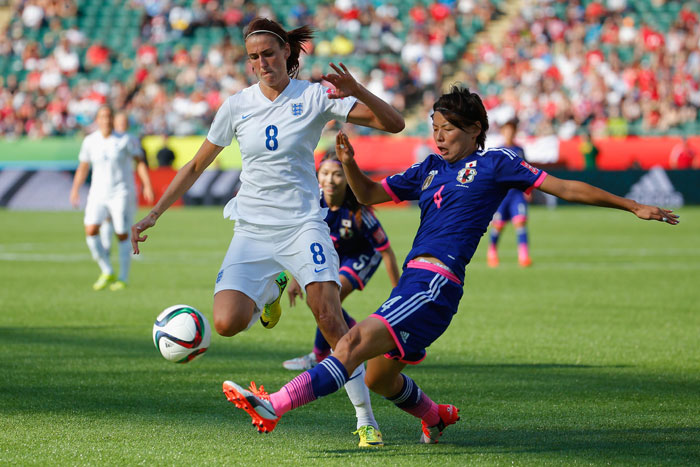 England’s Jill Scott (left) vies for the ball with Saki Kumagai of Japan during their FIFA Women's World Cup Semi-final match at the Commonwealth
Stadium in Edmonton on Wednesday. Japan won the match 2-1. Photo: AFP
Edmonton, July 2 An injury time own goal from England defender Laura Bassett put Japan into the World Cup final with a 2-1 victory on Wednesday, setting up a title rematch with the United States. The United States, who lost the 2011 final to Japan on penalties, booked their ticket to Sunday’s championship game in Vancouver with a 2-0 win over top-ranked Germany on Tuesday. Bassett’s attempted sliding clearance from a low cross crashed off the underside of the bar and over the goal-line to end England’s dreams of a first final in the cruellest of fashions. “It is heartbreaking to go out in the last minute after a good performance where we ran ourselves into the ground,” said England midfielder Jill Scott. “We couldn’t have given any more, but football is a cruel game sometimes.” The teams had been set for extra time after sharing two controversial first-half penalties - Aya Miyama’s 33rd minute spot kick being cancelled out by Fara Williams’ penalty seven minutes later. England, playing in their first Women’s World Cup semi-final, struck the bar twice in the second half and went close with several other opportunities but that counted for nothing after Bassett’s mishap which left her distraught. Defending champions Japan again left their victory late - their quarter-final win over Australia had come with an 87th minute winner. While England were left devastated, Japan coach Norio Sasaki told reporters his team deserved to win because they had been willing to risk defeat by pushing forward in the dying moments. “The goal was a result of everyone pushing us on with their support and came from our determination to win,” he said. “England played really well. I want my players to go into the final not being afraid of making mistakes.” England were bright and active from the outset and striker Jodie Taylor went close to a first minute opener when she turned sharply, broke clear of her marker and fired a strong drive just wide. Japan struggled to find their rhythm as England worked hard to close them down in midfield and neutralise their possession play style. The Asian champions grabbed the lead though in the 33rd minute through a controversial penalty, Saori Ariyoshi got goal side of England left-back Claire Rafferty who nudged her in the back and the referee pointed to the penalty spot. Television replays showed the foul had taken place outside of the penalty area but England’s protests were dismissed as Miyami took her time with a deliberate run-up and fired home the penalty. Just seven minutes later another debatable penalty award brought England level. Captain Steph Houghton went down inside the box, possibly after her heel was clipped by Yuki Ogimi, and New Zealand referee Anna-Marie Keighley immediately pointed to the spot and Williams cooly converted. After the break, the ‘Lionesses’ came close three times to getting ahead - a superb shot on the turn from Toni Duggan which crashed against the cross-bar, substitute Ellen White’s curling shot brilliantly pushed around the post and then from a corner Jill Scott flashed a header wide. They struck the woodwork again in the 78th minute when a miss-hit Rafferty cross looped against the top of the bar but then came the dramatic finish.
#Women's football #Japan football #England football #women's football World Cup
You May Also like: