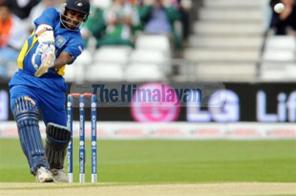 NOTTIGHAM: Sanath Jayasuriya and Tillekeratne Dilshan hammered an opening stand of 124 as Sri Lanka beat the West Indies by 15 runs in the World Twenty20 here on Wednesday.
The duo lifted Sri Lanka to 192-5, a total the West Indies chased bravely despite the absence of explosive opener and captain Chris Gayle, who missed the Group C match due to a knee injury.
The West Indians ended at 177-5, fired by a spectacular counter-attack by Dwayne Bravo and Ramnaresh Sarwan, who put on 77 off 59 balls for the fifth wicket. Bravo hit a 38-ball 51 that included five fours and two sixes, while Sarwan remained unbeaten on 28.
The match, watched by a sell-out crowd at Trent Bridge, held only academic interest since both teams had already qualified for the Super Eights at Australia's expense. Sri Lanka, who thumped Australia by six wickets in their first match, are hot favourites to make the semi-finals from Super Eights Group F which includes Pakistan, Ireland and New Zealand.
The West Indies are drawn in the tougher Group E which also has defending champions India, South Africa and hosts England. Two teams from each group will advance to the semi-finals.
Left-handed Jayasuriya, at 39 the oldest player in the 12-nation tournament, smashed 81 off 47 balls that was studded with 10 boundaries and three sixes. Dilshan, who contributed just 38 in the century partnership, went on to make 74 off 47 balls before he became one of seamer Lendl Simmons' four victims.
All-rounder Kieron Pollard bore the brunt of the Sri Lankan assault, conceding 45 runs from his three overs. The West Indies made a spirited reply, reaching 70-1 by the seventh over before losing three wickets in the space of as many runs. Two of those wickets fell in one over from spinner Ajantha Mendis, who had Xavier Marshall caught in the deep before bowling danger man Shivnarine Chanderpaul for one.
Proteas win thriller
LONDON: South Africa left-arm spinner Roelof van der Merwe took two key wickets as the Proteas beat New Zealand by one run off the last ball in their 'dead' World Twenty20 group clash at Lord's here on Tuesday.
The Black Caps were cruising at 82-2, chasing just 129 to win, when van der Merwe, who finished with 2-14, bowled Ross Taylor as the batsman slogged across the line. He then had top scorer Brendon McCullum stumped for 57 and New Zealand were 93-4 off 17 overs.
Come the last over, from teenage seamer Wayne Parnell, New Zealand still needed 15 to win. With 10 runs required off three balls, a diving Jacques Kallis at long-off dropped Jacob Oram and next ball the left-hander glanced a boundary.
But with four needed off the last ball, Oram couldn't manage a repeat display and was run out by South Africa captain Graeme Smith. Left-handed opener Smith top-scored for his side with 33 off 35 balls in a modest total of 128-7. However, this was a 'meaningless' match with both sides already through to the second stage Super Eights after they'd each defeated minnows Scotland.
Earlier, Ian Butler led the New Zealand attack with two for 13. Stand-in captain McCullum got the Black Caps off to a brisk start and he went on to complete a 46-ball fifty with five fours. But Martin Guptill, opening in place of the injured Jesse Ryder, went cheaply for six.
And when Neil Broom, who'd taken Ryder's place in the side, was caught and bowled for one by a diving Kallis, New Zealand were 26 for two. But a stand of 56 between McCullum and Taylor appeared to have repaired the early damage. New Zealand were again without captain Daniel Vettori because of the left-arm spinner's shoulder injury.
Both these teams begin their Super Eights programme at Trent Bridge on Thursday. New Zealand play Ireland while South Africa take on hosts England.

#Jayasuriya #Dilshan overpower West Indies
You May Also like: