Klopp urges inconsistent Liverpool to get back on track 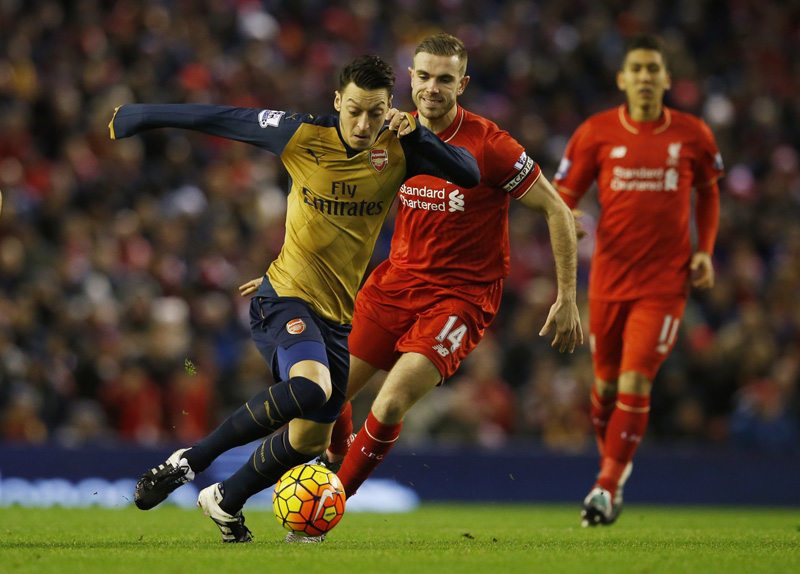 Liverpool's Jordan Henderson in action with Arsenal's Mesut Ozil during Barclays Premier League at Anfield in January 13, 2016. Photo: Reuters
LONDON: Several of the Liverpool team that went down meekly 3-1 at struggling Leicester City on Monday are playing well below their best, manager Juergen Klopp said on Friday, admitting a quick reaction was needed to get their season back on track. Liverpool, who are fifth in the table and have won just one league game since the turn of the year, host fourth-placed Arsenal on Saturday looking to bounce back immediately from one of their worst performances of the season. "It doesn't feel that free-flowing anymore but that's how seasons are," Klopp told reporters on Friday. "Only (runaway league leaders) Chelsea have that feeling still, all the rest have had better or worse moments in the season. "We have a lack of consistency. We cannot ignore it." Klopp said there was room for improvement throughout the side after watching the likes of Roberto Firmino and Philippe Coutinho struggle. "I am not a clown even if few people think I am," the German added. "I am not always laughing like crazy. I am a normal person... "We have to do better, 100 percent. Not only Phil and Roberto. There are a few other players who have a lot of space to improve. We have to be as confident as possible in the next game." Klopp challenged his players to respond against Arsenal. "It's Anfield, our stadium and the last game we played there was fantastic. We want that feeling again," he added. "We need to bounce back. We need to keep the points at Anfield." Captain Jordan Henderson is unavailable for Saturday's game, while striker Daniel Sturridge has a hip injury.
#Liverpool #English Premier League #Roberto Firmino #Jordan Henderson #Leicester City #Philippe Coutinho #Juergen Klopp
You May Also like: