Lighten up: Allardyce wants England players to have fun 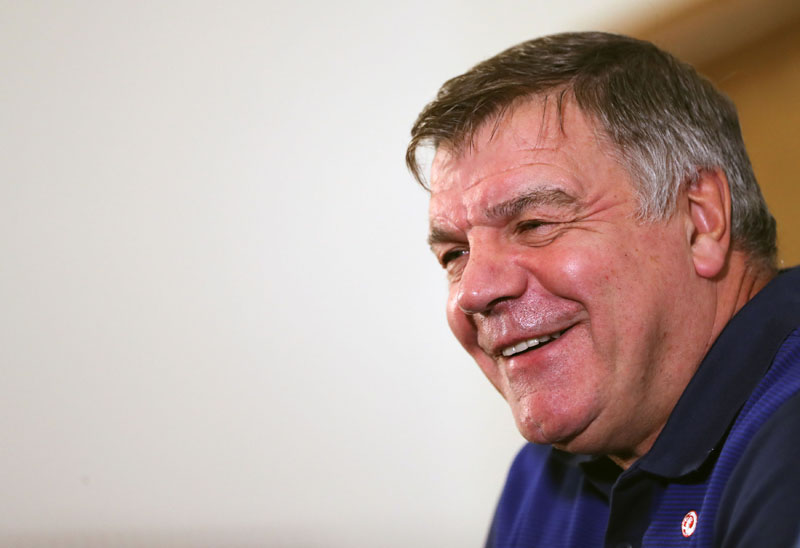 England football team manager Sam Allardyce, smiles during the press conference at St George's Park, Burton central England, on Monday August 29, 2016. England will play Slovakia in a World Cup qualifying group match in Slovakia on Sunday. Photo: Simon Cooper/PA via AP
For Sam Allardyce, England's long journey back to respectability in world soccer starts with lightening up and having some fun. The national team's new coach has lined up comedians from British television to host a quiz night at England's training camp. He's urging players to chill out by playing pool and table-tennis in their downtime. There are photographs and messages on the walls of the national training center, one of which reads: "The Journey Begins Here." "I haven't come here to be miserable," Allardyce said. Miserable just about sums up England's experiences over the last two years. After a group-stage elimination at the 2014 World Cup in Brazil came the humiliating last-16 loss to tiny Iceland at the European Championship in June. The country that invented football is now something of a joke in the global game because of its implosions every two years at major soccertournaments. It's widely believed that England's players have the talent, but are mentally fragile on the big stage — and that's what Allardyce has set about changing after taking over from Roy Hodgson in July. "Big Sam," as he is known, wants to create an environment where his players feel comfortable and relaxed when they report for England duty. Hence the new ideas and the new look at St. George's Park, a national training center located in a sleepy town in central England and opened in 2012 at a cost of $160 million. "The facility itself is fantastic, but there are some times when you can feel like you are stuck here a bit," Allardyce said. "We've walked around saying, 'What can we do to make more of an impact on the players?' "There will be other messages. It's the journey we are on. I just wanted to brighten this place up." The England squad met up Monday for the first time since its embarrassing Euro 2016 exit in Nice two months ago, and Wayne Rooney — England's captain — was asked Tuesday for his initial thoughts on the new coach. "You can see he's a relaxed guy," Rooney said, with a laugh. Allardyce is trying his best to make a good early impression. Arriving at St. George's Park, journalists were handed a typed letter from Allardyce, saying he was looking forward to working with them and to making the nation "proud of our football team." The journey starts with England's opening qualifying match for the 2018 World Cup, against Slovakia on Sunday. But it isn't in qualifiers or friendlies where England is judged, rather in the knockout games in World Cups or European Championships - where reputations and history is really on the line. A new era doesn't mean a new captain. Rooney will keep the armband under Allardyce, who sees the Manchester United striker as the right choice to lead the team because he is the most senior and respected member of the squad. Rooney said Tuesday he will not play for England beyond the next World Cup, so Russia in 2018 is his last shot at a trophy on the international stage. That is also when Allardyce's contract runs to. "I'm going to try and enjoy these two years," Rooney said, "and hopefully I can end my career with England on a high. "I started playing football professionally when I was 16, international football when I was 17. So 15 years of international football is a lot of years and, in my eyes, I think that would be the right time to finish." By then, it should also be clear if Allardyce's new approach has worked. "The difficulty lies in coping with tournament football and trying to find a solution," Allardyce said. "But I can't think about that until we get there."
#England #Sam Allardyce #A New Start
You May Also like: