Lionel Messi could make his return after 3-week layoff 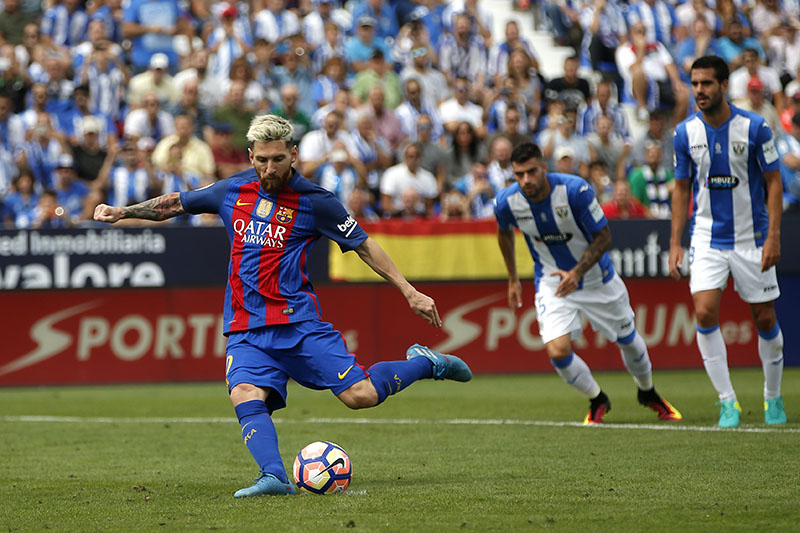 Barcelona's Lionel Messi scores from a penalty kick during the Spanish La Liga soccer match between Leganes and Barcelona at the Butarque stadium in Madrid, Spain, on Saturday, September 17, 2016. Photo: AP

BARCELONA: Lionel Messi is ready to make his return for Barcelona. Probably.

The Argentina forward has been out for three weeks with a right groin strain, but Barcelona coach Luis Enrique said Friday that Messi could play against Deportivo La Coruna at Camp Nou on Saturday.

"I never give clues to opposing coaches," said Luis Enrique, who will announce his squad on the day of the match.

"In the case of Leo, he has been training with us since Wednesday," the coach said. "It's clear that since he is coming back from injury he needs minutes both in training and in games. Tomorrow I will talk with him, but he is available."

After the match against Deportivo, Barcelona will host Manchester City in the Champions League — a game in which the Spanish team will face former coach Pep Guardiola.

Barcelona has only won one of three league matches since Messi went down in the second half against Atletico Madrid on Sept. 21. Atletico rallied to draw 1-1, Barcelona routed Sporting Gijon 5-0 and lost at Celta Vigo 4-3 with Messi out.

Deportivo has yet to win away from home this season, but the Galician side has managed the impressive feat of earning a pair of 2-2 draws in its last two league visits to Barcelona.

Lucas Perez, now at Arsenal, scored for Deportivo in both of those matches to spark comebacks from two goals down. With Perez gone, Deportivo may turn to new signing Ryan Babel to spark its lethargic attack. The former Liverpool player scored Deportivo's late winner in its last match.

"I think Deportivo got extremely lucky in the last two games here," Luis Enrique said, insisting he didn't want his players looking toward the match against City.

"There is only one match for us, the one against Deportivo," he added. "We want to win to recover points quickly. Thinking about a match that is coming next week is a mistake."