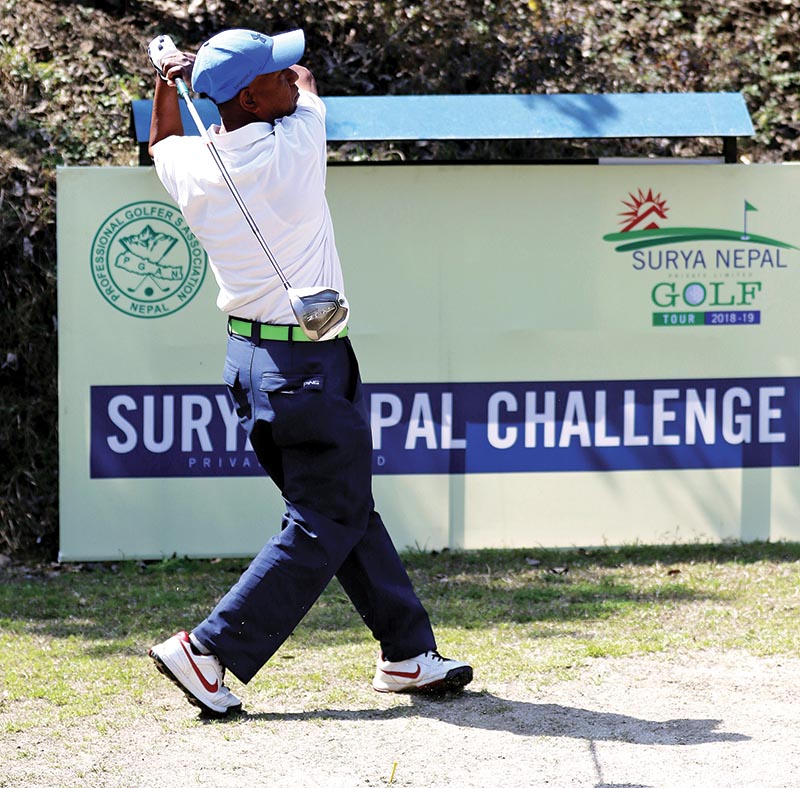 Rame Magar plays a shot on the first hole during the third round of the Surya Nepal Challenge at the Royal Nepal Golf Club in Kathmandu on Thursday. Photo: THT
Kathmandu, March 7 Rame Magar carded five-under 63 and opened up two-stroke lead over defending champion Bhuwan Nagarkoti after the third round of the Surya Nepal Challenge here today. The Royal Nepal Golf Club pro Magar posted the 54-hole total of five-under 199 at his home course to move three places up in the leaderboard. Holder Nagarkoti also carded 63 to bring him back in contention at three-under 201, while Amateur golfer Subash Tamang was third 202 after he shot one-over 69. Magar carded two-under 32 on the front nine where he shot three birdies in the first four holes and faced a bogey. He made a flying start carding two consecutive birdies and added another on the fourth. Magar faced a bogey on the seventh and saved pars on next two holes. Magar carded three-under 31 on the back nine. He began it with an eagle on the par-5 10th and carded birdies on the 11th, 13th and 14th holes. Magar suffered a double bogey on the 16th hole. Defending champion Nagarkoti played a bogey-free round carding two-under 32 and three-under 31 in two halves. He had two birdies on the fourth and ninth holes of the front nine and saved shots on the 10th, 11th and 16th holes. Amateur golfer Tamang shot one-over 35 on the front nine after he began the day with a double bogey and carded even-par 34 after taking the turn. He carded three birdies on the second, fifth and 13th holes, while he faced bogeys on the fourth and 17th holes. He was 10 strokes ahead of Binod Tamang in amateur section, while Tanka Bahadur Karki was third at 208. Overnight leader Bhuwan Kumar Rokka slipped to joint fourth with Bikash Adhikari at one-under 203. Rokka shot three-over 71, while Adhikari carded two-under 66. Former No 1 pro Rabi Khadka (70) and Dinesh Prajapati (69) shares the sixth position at 206, followed by Ram Krishna Shrestha (69) at 207. Jayaram Shrestha (72) and Sanjay Lama (71) were tied for ninth at four-over 208. The sixth event under the Surya Nepal Golf Tour carries a purse of Rs 441,000. Top three pros will earn Rs 84,000, Rs 53,000 and Rs 37,000 respectively. Others in top 21 will also receive their share of cash prizes.
#Royal Nepal Golf Club #Surya Nepal Challenge
You May Also like: