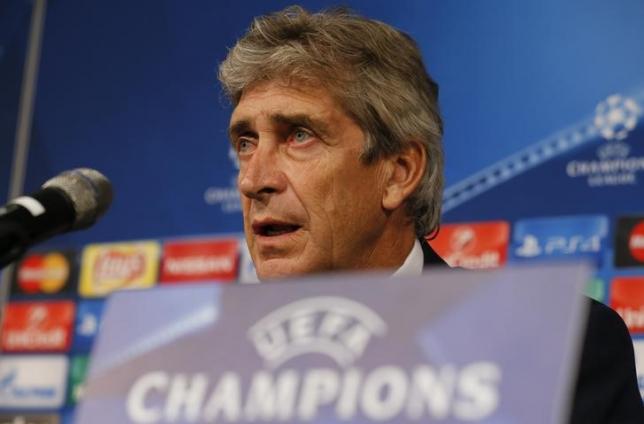 Manchester City coach Manuel Pellegrini of Chile speaks during a news conference on the eve of their Champions League Group D soccer match against Borussia Moenchengladbach in Moenchengladbach, Germany September 29, 2015. REUTERS
Despite being knocked out of the Champions League in the last 16 in the previous two campaigns, Manchester City manager Manuel Pellegrini does not believe his side have failed in Europe. City, who lost their opening Group D game to Juventus and play Borussia Moenchengladbach on Wednesday, have been knocked out of Europe's most prestigious club competition by Barcelona in back-to-back seasons. "I don't think we have failed in Europe," Pellegrini told reporters. "We have qualified for the knockout stages in my two seasons here and then we lost to Barcelona, who are the best team in the world. "We have beaten Bayern Munich twice. Last season we won our last two games against Bayern and Roma so we know how to do it. This season we lost to Juventus -- a strange game," he added. City will be without influential skipper Vincent Kompany for Wednesday's game. The club had not conceded a goal in their first five Premier League games this season when Kompany started, but have shipped six in the two league games in which the Belgium did not feature, losing 2-1 to West Ham and 4-1 to Tottenham Hotspur. However, Pellegrini said the recent woes were due to the rising injury count rather than the loss of one player. "Of course Vincent is a very important player, he is our captain and he has started the season very well, but I don't think one player is crucial," said Pellegrini. "I think it is the amount of injuries we have had that has been the more important thing. We have a strong squad but it is not easy to sustain 11 injuries." On a brighter note, the club's record signing Kevin De Bruyne has been in fine form and scored three goals from five appearances so far. Pellegrini said the Belgian could develop into an even better player with the help of experienced team mates like David Silva and Yaya Toure. "Maybe he had to play before he was quite ready, but he has given his answer on the pitch," the 62-year-old Chilean said. "He is a very technical player, and playing with David and Yaya will help his development into an even stronger player."
#Champions League #Manchester City #Manuel Pellegrini
You May Also like: