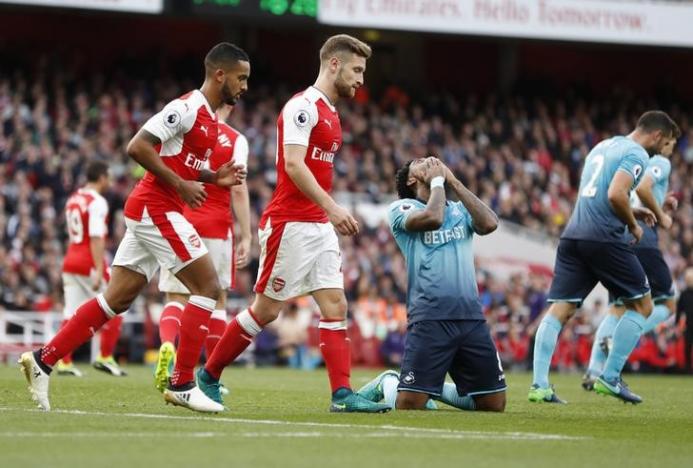 Swansea City's Leroy Fer looks dejected after a missed chance. Reuters
LONDON: Arsenal joined Manchester City at the top of the Premier League on Saturday after leaders City suffered another afternoon of penalty woes in a 1-1 draw with Everton that ended their 100 percent home record this season. Arsenal's hard-earned 3-2 win over Swansea City, featuring a double from Theo Walcott, put them level with City on 19 points but Pep Guardiola's side remained as leaders on goal difference. Tottenham Hotspur, who had started the day in second place, missed a chance to go top, needing an 89th-minute goal from Dele Alli to rescue a 1-1 draw at West Bromwich Albion and protect their record as the only unbeaten side in the league. Guardiola saw his side's perfect record disappear at the Etihad after Kevin De Bruyne and Sergio Aguero both had poor penalties saved by Maarten Stekelenburg in a game the leaders dominated. City have now missed four of their eight penalties this season, leaving Guardiola to opine: "The players have all the qualities to score penalties but we miss a lot. Hopefully, we will score more of them in future." Romelu Lukaku made City pay in between the missed spot-kicks with his sixth goal of the season for Everton before Nolito finally landed the reward for City's pressure with a 72nd minute equaliser. Guardiola said he was "proud" of his players. Stekelenburg, Everton's hero, reckoned Phil Jagielka, whose fouls had given away both penalties, was the most relieved man at the Etihad. "Will Phil Jagielka buy me dinner after that? I will ask him!" the Dutchman joked. Arsenal introduced Swansea's new manager Bob Bradley, the first American to take charge of a top-flight English side, to the harsh realities of Premier League life as Arsene Wenger's men won a sixth consecutive league match. Walcott struck twice in the space of seven minutes in the first half and came perilously close to a hat-trick while Mesut Ozil also scored on his 28th birthday. History-maker Bradley, though, was impressed by his new charges, who gave Arsenal a fright, scoring twice through Gylfi Sigurdsson and Borja Baston, as the Gunners had to play the last 20 minutes without Granit Xhaka, dismissed for a trip. Wenger was left thrilled by the form of Walcott, who also hit the woodwork and could have scored four. "Theo had a difficult time with England but it may have been a lack of confidence as he has been out of the side for a while -- but not with Arsenal," Wenger said. Tottenham were dominant at the Hawthorns but looked set to lose when their former player Nacer Chadli, who has been prolific for West Brom since his summer move, put them ahead in the 82nd minute. England international Alli, however, ensured Spurs remained unbeaten after the opening eight league matches of the season for the first time since 1990. They are now one point behind City and Arsenal in third place but Liverpool, who are two points further back, can leapfrog them with a win over Manchester United on Monday. Spurs manager Mauricio Pochettino was disappointed with the draw but felt the team "had showed their character" after going behind so late. Chelsea, who moved up to fifth, hammered the team that succeeded them as Premier League winners as champions Leicester City capitulated 3-0. Goals from the league's top scorer Diego Costa, who netted his seventh of the season, Eden Hazard and Victor Moses made last season's glory feel like pre-history for Claudio Ranieri, whose title winners had received a guard of honour at Stamford Bridge in May. The battle of the bottom two sides saw Stoke City leave Sunderland stranded at the foot of the table with a 2-0 victory thanks to the in-form Joe Allen, who struck twice in the first half. Performance of the day came from Bournemouth, who enjoyed a third straight win for their biggest Premier League triumph with a 6-1 thrashing of struggling Hull City.
#Premier League #Everton #Manchester City #Pep Guardiola
You May Also like: