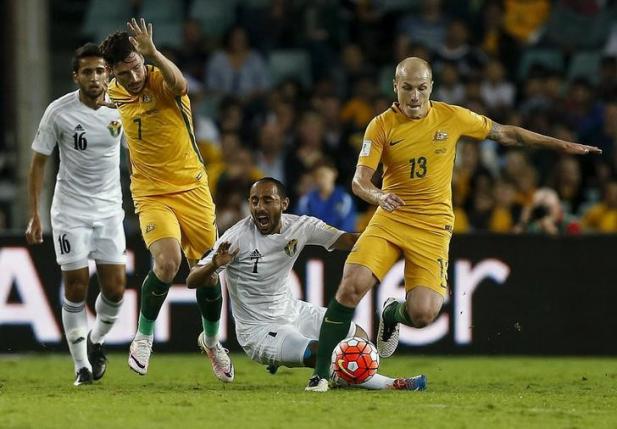 Jordan's Monther Abu Amara (C) is tackled by Australia's Mathew Leckie (L) and Aaron Mooy during their World Cup 2018 Qualifier at the Sydney Football Stadium. REUTERS
Australia midfielder Aaron Mooy has signed a three-year deal with Manchester City, joining the English Premier League side from sister club Melbourne City. Mooy is a creative attacking midfielder who enjoyed a stellar 2015-2016 season with Melbourne City, scoring 11 goals and providing an A-League record 21 assists. Melbourne City were founded as Melbourne Heart but rebranded in 2014 after their purchase by the Abu Dhabi United Group, whose City Football Group (CFG) also owns and operates Mooy's new club. Mooy, who has played 15 times for his country, should be prepared to spend time on loan at other clubs if the experience of other Australians who have joined City is anything to go by. Defensive midfielder Luke Brattan, who moved to Manchester in October 2015, had a spell at Bolton Wanderers and will be loaned to the Melbourne franchise for the next A-League season. Another Manchester City midfielder, Anthony Caceres, moved to Melbourne on loan halfway through last season and will remain with the club for the new campaign, which starts in October. "Aaron is an extremely talented player who possesses the attributes we hope to foster and encourage within the City Football Group," CFG managing director Brian Marwood said in a news release. "With the unique model CFG provides, Aaron's move to Manchester allows us to further expose him to a high standard of opportunities to ensure his professional growth." CFG also own Major League Soccer side New York City, a minority stake in Japanese club Yokohama F. Marinos and recent media reports have linked the consortium with moves to establish a presence in the Chinese Super League (CSL).
#Australia #Manchester City #Aaron Mooy
You May Also like: