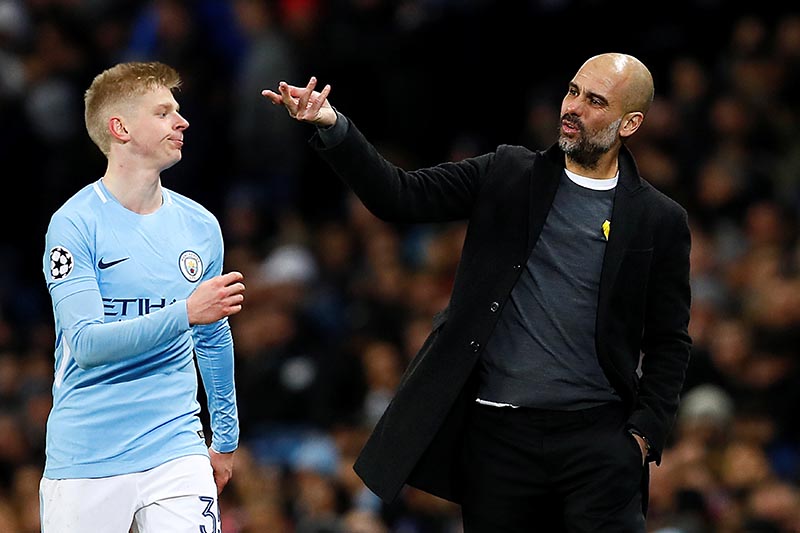 Manchester City manager Pep Guardiola with Oleksandr Zinchenko during the Champions League, round of 16, second leg soccer match between Manchester City and Basel at the Etihad Stadium in Manchester, England, Wednesday, March 7, 2018. Photo: Reuters
BENGALURU: Manchester City's Fernandinho, Raheem Sterling and Fabian Delph are recovering well from their injuries and face fitness tests to determine if they will be available for Monday's Premier League game at Stoke City, manager Pep Guardiola said. Midfielder Fernandinho has not featured since injuring his hamstring in City's 3-0 League Cup final victory over Arsenal last month while forward Sterling is also coming back from a similar problem and last played in the league in the 5-1 win over Leicester. Delph was suspended for three games after his dismissal in the 1-0 FA Cup fifth round loss at Wigan Athletic last month and missed Wednesday's 2-1 Champions League last 16 second leg defeat by Swiss side Basel with a muscle injury. "Some of them are better. Fernandinho and Sterling are much better. Fabian Delph is like this, like that (uncertain)," Guardiola told reporters on Friday. "We have training sessions to decide before the game. Today, the players are off, so I don't exactly know the situation." Leaders City have 78 points with nine games left and need four wins to wrap up their first league title under Guardiola. They also have a chance to become the first team to break the 100-points barrier in the history of the English top flight. "I know everyone wants to anticipate the situations, when we will win the title. The best example is two days ago, we lost against Basel," said Guardiola, whose side reached the Champions League quarter-finals with a 5-2 aggregate victory over the Swiss club. "Just be relaxed, be calm and focus on Stoke." Paul Lambert's relegation-threatened Stoke are 19th in the table with 27 points. They suffered their heaviest defeat of the current campaign at the Etihad Stadium earlier this season when they were beaten 7-2 by City.
#Raheem Sterling #Stoke City #Manchester City #Pep Guardiola #Fabian Delph #Fernandinho #English Premier League football
You May Also like: