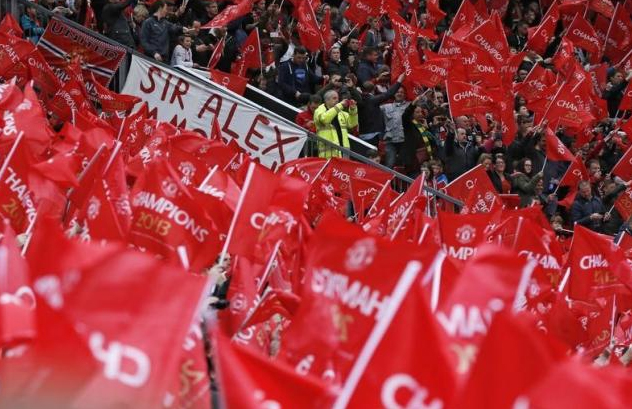 Manchester United fans wave flags before the English Premier League soccer match against Swansea City at Old Trafford stadium in Manchester, northern England May 12, 2013. Photo: Reuters
Manchester United fans are planning to protest against being asked to pay 71 pounds ($101.5) per ticket for their Europa League away match against Danish league winners Midtjylland on Thursday, according to reports in the British media. Southampton fans paid 22 pounds per ticket when their team travelled to play Midtjylland in the Europa League playoff round in August and United fans will display banners to indicate their dissatisfaction with the price being charged. "Seventy-one pounds to watch a Europa League match is extortionate," Andy Mitten, editor of the United We Stand fanzine, said. "The combined cost of all three tickets for Manchester United's Champions League away games was only 75 pounds. Do they think United fans are three times wealthier than Southampton fans? Midtjylland are ripping fans off -- their own and the 800 travelling fans." Last week, Liverpool's owners abandoned plans to raise the price of the most expensive match-day ticket to 77 pounds next season after supporters staged a walkout protest during their home game against Sunderland on Feb. 6. Duncan Drasco, chief executive of the Independent Manchester United Supporters' Trust, described Midtjylland's stand on pricing as a "real slap in the face". "Clubs need to accept they are not selling tickets in a normal competitive market as fan loyalty means each club is an effective monopoly so they shouldn't be applying normal supply and demand economics," he added.
#Manchester United #Europa league
You May Also like: