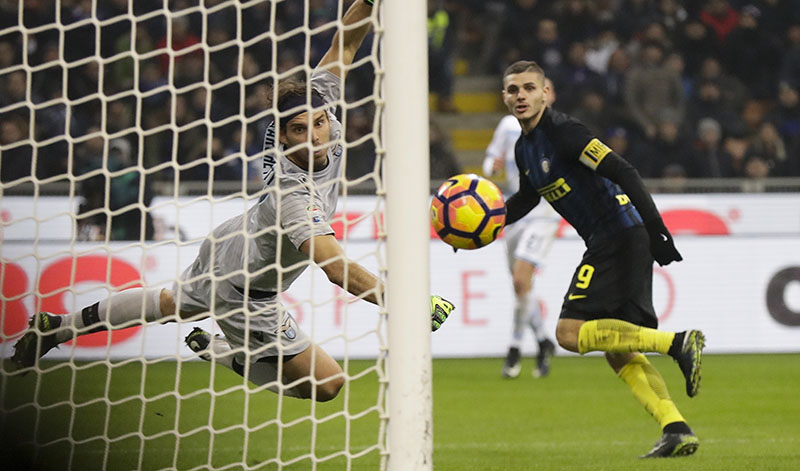 Inter Milan's Mauro Icardi scores past Lazio goalkeeper Federico Marchetti during a Serie A soccer match between Inter Milan and Lazio, at the San Siro stadium in Milan, Italy, Wednesday, Dec. 21, 2016. (AP Photo/Luca Bruno)
MILAN: Mauro Icardi ended 2016 in style as he scored two goals to help Inter Milan beat Lazio 3-0 in Serie A on Wednesday in coach Stefano Pioli's first match against his old team. Icardi almost had a hat trick but hit the post with nine minutes remaining. "We are working very well but now we must not waste everything after the holidays like last year when we did well until December then threw everything away," Icardi said. "The whole team had a good game, not just me. We did well physically and mentally, and got the points as a consequence." Inter Milan remained seventh, four points below fourth-placed Lazio, which missed the chance to move second in the standings ahead of the rest of the final round before the winter break. "We had a great first half, unfortunately we didn't manage to score and ... a team like ours can't allow itself to concede three goals in 12 minutes," Lazio coach Simone Inzaghi said. "Unfortunately we have conceded 17 goals in second halves. It's a statistic to take into consideration and something we have to change, or we will never take a step up in quality." It was the first time Inter had won five consecutive home matches since May 2011. Pioli, who was sacked by Lazio in April, replaced the fired Frank de Boer last month. Lazio was the stronger team in the first half and tested Inter in the opening minute as goalkeeper Samir Handanovic parried Ciro Immobile's effort. However, two goals in as many second-half minutes turned the match around. Ever Banega opened the scoring nine minutes after the break with a thunderous strike into the top right corner. Icardi doubled Inter's lead almost immediately, sneaking round the back of Lazio center-half Stefan de Vrij to the near post to head Danilo D'Ambrosio's cross into the far corner. Icardi appeared to come alive after finding the net and the two goalscorers combined in the 65th to put the result beyond doubt. Banega floated in a cross to his fellow Argentine and Icardi's effort bobbled into the back of the net through a crowd of bodies. It was Icardi's 14th league goal of the season, moving him to the top of the Serie A goalscoring charts, with two more than Roma forward Edin Dzeko.
#Inter Milan #Lazio #Italian Serie-A #Stefano Pioli #Mauro Icardi #Italy Soccer Serie A
You May Also like: