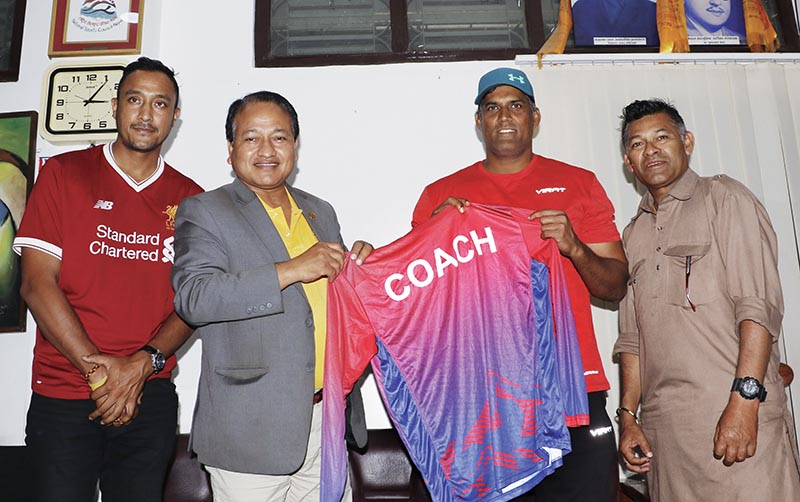 NSC Member Secretary Keshab Kumar Bista handing over jersey to new coach of Nepal national cricket team Umesh Patwal (right) in Kathmandu on Saturday. Photo: THT
Bista also handed over the jersey to Patwal. “The coach is managed by the International Cricket Council upon our request. The players wanted a new coach and we requested the ICC to send one as we are preparing to host the 13th South Asian Games,” said Bista. “For now, Patwal will look after the national team and we will decide further roles in due course. If needed we are ready to bring in other coaching staff for the team,” he added. Patwal — who will replace Jagat Tamatta as the new head coach — will get $7,000 per month and Bista informed the salary of the coach would be managed by the ICC. Asked about skipping yesterday’s programme, Bista said he was not aware of such ceremony. “It’s not a big deal. We had not completed our preparation and I had no idea about any programme regarding the contract signing and unveiling of the coach,” said Bista. After signing the MoU, Patwal hoped to get support from all stakeholders. “I have seen the team on the pitch and I think together we can do some amazing things,” said Patwal, who was Nepal’s batting consultant during the team’s maiden One Day International and Twenty20 International series victories against the United Arab Emirates earlier this year. The former Afghanistan national team coach Patwal said he would not hesitate to seek support from Tamatta. “I know Jagat Tamatta is a good human being and I will not feel ashamed to take help from him whenever needed,” said Patwal, who has already set an ambitious target of taking Nepal to 2023 ICC World Cup. National team skipper Paras Khadka said the players were happy and excited to get the new coach. “With the arrival of the coach, we have got added responsibilities ahead. The combination of coach and players is essential to reach the new target. And I hope we will reach new heights with the support from NSC and other stakeholders,” added Khadka. Khadka also lauded coach Jagat Tamatta’s contribution in Nepali cricket. “I would like to thank Tamatta for his relentless efforts in taking Nepali cricket to this level and I hope he will continue to contribute in the development of the sport from his end,” said Khadka. Outgoing head coach Tamatta welcomed Patwal and wished for a successful tenure. “I would like to thank all the individuals who supported me and my team during my tenure. We have reached to a level and I hope it will continue to grow under Patwal. Our next target is World Cup and we all need to support the new coach to achieve the goal,” said Tamatta, the chief cricket coach at the sports governing body.
#National Sports Council #Nepal national cricket team #National cricket team #Umesh Patwal
You May Also like: