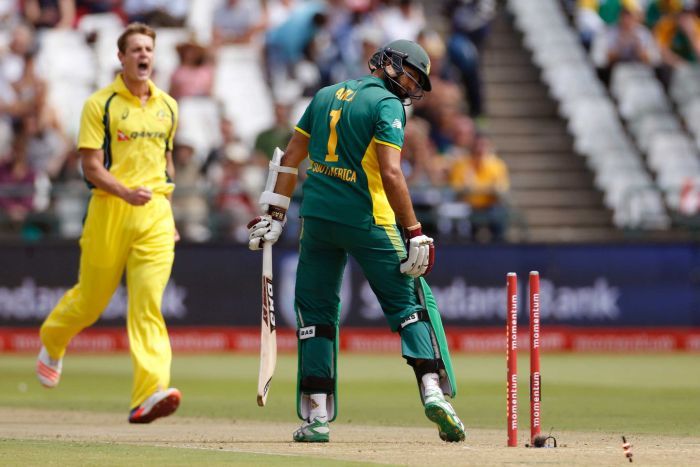 Joe Mennie. Photo: AP
SYDNEY: Australia's selectors sprung a major surprise on Friday by naming uncapped fast bowler Joe Mennie in a 12-man squad for the first two matches of a three-test series against South Africa beginning in Perth next week. Mennie was part of an inexperienced bowling attack that was humbled by the Proteas batsmen in the recent one-day series in South Africa, which the hosts won 5-0. Despite accumulating figures of 0-82 on debut, the 27-year-old was preferred to Jackson Bird, who toured New Zealand and Sri Lanka as part of the Australian test squad. "Joe bowls a great length at a lively pace and his form in first-class cricket has been terrific in the last 12 months," chairman of selectors Rod Marsh said in a statement. "He also impressed us during the recent Australia A Series in Queensland. "He was the highest wicket-taker in the Sheffield Shield last season and is very handy with the bat." Selectors also chose Shaun Marsh over Joe Burns to open alongside David Warner. Burns hoped he had done enough for a recall by scoring an unbeaten century for Queensland this week in a Sheffield Shield match against a New South Wales side featuring the heart of the Australia bowling unit. Marsh, who replaced Burns for the third test in the series in Sri Lanka and made 130 and 23, has also been in good domestic form, though, and proved he had recovered from his injury by playing for Western Australia. "Both Shaun and Joe played very well in the Sheffield Shield round but Shaun is coming off back-to-back hundreds in test matches and has performed very well in Perth and Hobart so we have opted to go with him," Marsh added. Left-hander Usman Khawaja also returns to the side after he and Burns were dropped during the 3-0 drubbing in Sri Lanka and looks likely to bat at number three. The middle order has remained intact despite Australia's struggles with the bat against spin bowling in Sri Lanka. Josh Hazlewood and Mitchell Starc, who proved his fitness in the Sheffield Shield after recovering from a nasty leg injury, look set to lead the pace attack. The first test begins in Perth next Thursday with the second match in Hobart and a day-nighter in Adelaide to follow. Team (one to be omitted): Shaun Marsh, David Warner, Usman Khawaja, Steve Smith (captain), Adam Voges, Mitchell Marsh, Peter Nevill (wicketkeeper), Mitchell Starc, Joe Mennie, Josh Hazlewood, Peter Siddle, Nathan Lyon
#Australia #South Africa #Joe Mennie
You May Also like: