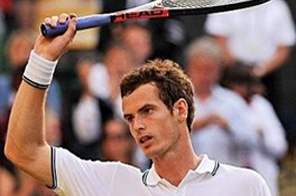 Andy Murray celebrates after beating Latvia's Ernests Gulbis 6-2, 7-5, 6-3 at the All England Tennis Club on the fourth day of the Wimbledon Tennis Championships in London. Source: AFP

LONDON: Andy Murray moved closer to ending Britain's 73-year wait for a Wimbledon men's champion on Thursday, but Lleyton Hewitt and Andy Roddick took aim at derailing the flying Scotsman.
Third seed Murray eased into the third round with a 6-2, 7-5, 6-3 win over Latvia's Ernests Gulbis in a disappointingly one-sided Centre Court clash.
The 22-year-old Murray, who has received a letter from Queen Elizabeth II congratulating him on his performances, will face Serbian 30th seed Viktor Troicki for a place in the last 16.
"Gulbis had a chance to break at the start, but after that I relaxed and then served really well for the rest of the match," said Murray. "I didn't give him many opportunities and I felt very comfortable."
Hewitt, the 2002 champion, rolled back the Wimbledon years to reach the third round with a blistering dismissal of Argentine fifth seed Juan Martin del Potro.
The 28-year-old Australian demolished del Potro, eight years his junior, 6-3, 7-5, 7-5 to reach the third round for the ninth time and now tackles Germany's Philipp Petzschner for a place in the last 16.
The Australian, whose ranking has slipped to 56 following hip surgery, collapsed to his knees in celebration at the end.
"I haven't beaten a top five player for a long time," said Hewitt.
"I was really up for it today. When you have played a final on Centre Court you should be able to handle the pressure but I knew that Juan Martin is a helluva player."
If Hewitt makes it to the quarter-finals, he could clash with two-time runner-up Roddick who saw off Russia's Igor Kunitsyn 6-4, 6-2, 3-6, 6-2.
Like Hewitt, American sixth seed Roddick virtually carries his men's tennis hopes.
"This ain't Candy Land. We can't really make fantasy worlds up. You just kind of deal with it and move on," said the 26-year-old Roddick, who faces close friend Jurgen Melzer in the next round.
While Hewitt and Murray had a packed Centre Court on its feet, it was business as usual in the women's draw as five-time champion Venus Williams, French Open winner Svetlana Kuznetsova and world number one Dinara Safina eased into the last 32.
Third-seeded Williams, the defending champion, took only an hour to see off Ukraine's Kateryna Bondarenko 6-3, 6-2 while Russian fifth seed Kuznetsova spent just four minutes longer in disposing of France's Pauline Parmentier 6-1, 6-3.
Williams goes on to face Spain's Carla Suarez Navarro while Kuznetsova, a three-time quarter-finalist, meets promising German Sabine Lisicki.
"Everything was working for me. I'm on a great run here and I just want to keep it going," said Williams, who played with heavy strapping on her left knee.
Safina, still looking for a first Grand Slam debut to back-up her number one status, saw off Paraguay's Rossana De Los Rios 6-3, 7-5.
The Russian next plays Belgium's Kirsten Flipkins who ended British interest in the women's singles with a 7-5, 6-1 win over Elena Baltacha.
Australian 18th seed Samantha Stosur, a semi-finalist at the French Open, struggled past German qualifier Tatjana Malek 4-6, 7-6 (8/6), 6-4 and will face former world number one Ana Ivanovic.
France's Amelie Mauresmo, the 2006 champion, also went through as did Danish ninth seed Caroline Wozniacki and China's Li Na, who made the last eight in 2006.
Teenager Melanie Oudin, the youngest woman left in the draw, proved there is more to American women's tennis than just the Williams sisters by seeing off Kazakhstan's Yaroslava Shvedova 3-6, 6-2, 6-4.
Oudin tackles former world number one Jelena Jankovic in the last 32.

#Murray shines at Wimbledon as Hewitt #Roddick loom
You May Also like: