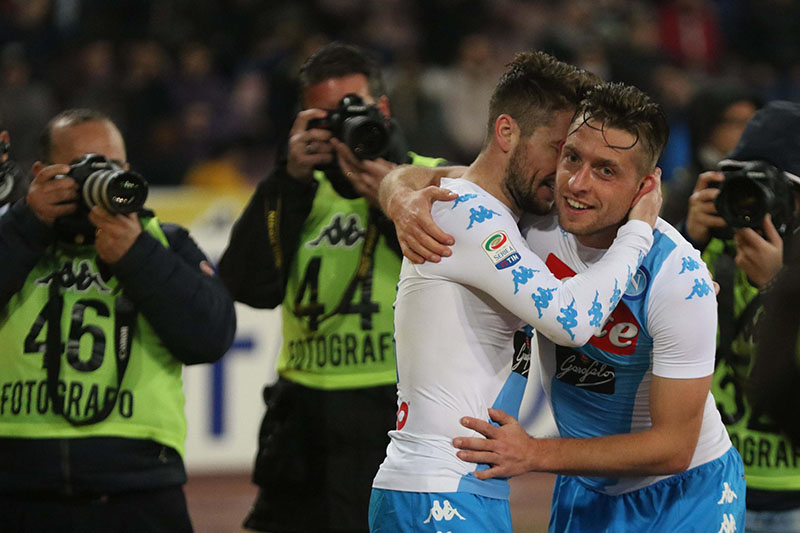 Napoli's midfielder Emanuele Giaccherini (right) celebrates embracing his teammate Dries Martens after scoring a goal during the Italian Serie A soccer match between Napoli and Genoa at the San Paolo stadium in Naples, Italy, on Friday, February 10 2017. Photo: Cesare Abbate/ANSA via AP

NAPLES: Napoli prepared for its Champions League clash at Real Madrid by extending its unbeaten run with a 2-0 win against Genoa in Serie A on Friday.

Napoli, which visits Madrid for the first leg of its last-16 match on Wednesday, has not lost since a 2-1 defeat at Juventus in October.

Goals from Piotr Zielinski and Emanuele Giaccherini saw Napoli move into second spot in Serie A, one point above Roma, which visits Crotone on Sunday. Serie A leader Juventus travels to Cagliari.

Both sides had chances in the first half but Napoli never really got going until after the break.

It appeared to be a different side in the second half and broke the deadlock five minutes after the interval.

Dries Mertens was causing havoc in the Genoa defense and a clearance fell to Zielinski to fire into the far bottom corner from just inside the area.

Mertens, who has scored 16 league goals this season and is fighting for the top goalscorer award, was also involved in Napoli's second in the 68th minute.

The Belgian international ran onto a long ball, flicked it past Nicolas Burdisso and unselfishly rolled it across for Giaccherini to tap into an empty net for his first Serie A Napoli goal.

#Real Madrid #Napoli #Genoa #Italian soccer Serie A
You May Also like: