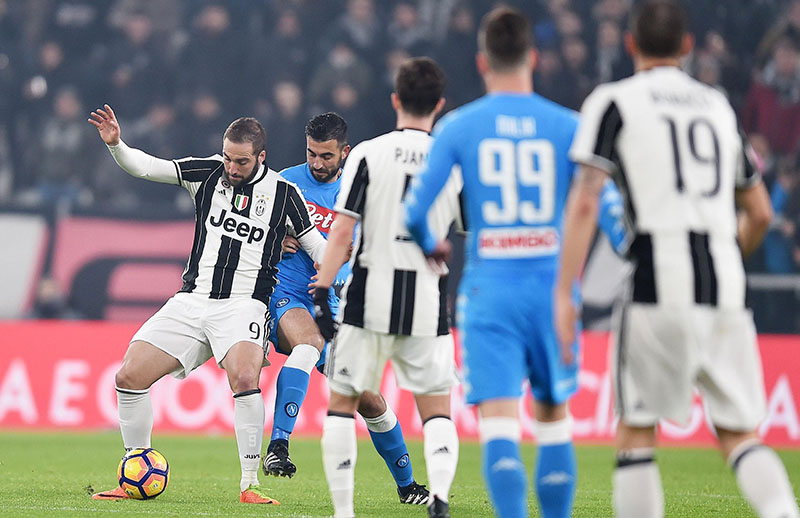 Juventus' Gonzalo Higuain (left) and Napoli's Raul Albiol vie for the ball during the Italian Cup first leg semifinal soccer match between Juventus and Napoli, at the Juventus Stadium in Turin, Italy, on Tuesday, February 28, 2017. Photo: Andrea Di Marco/ANSA via AP
TURIN: Juventus came from behind to beat Napoli 3-1 with the help of three favorable penalty decisions in a controversial first leg of their Italian Cup semi-final on Tuesday. Napoli had broken the deadlock with a well-worked team goal in the 36th minute. Lorenzo Insigne and Arkadiusz Milik played a rapid one-two and the former crossed into the box for Jose Callejon to volley in at the back post. But the momentum changed after the break with two contentious penalties awarded to Juventus — and one denied to the visitors. Napoli, which had been in a self-imposed media blackout for more than a week, decided to break its silence after the match. "We haven't decided to interrupt our media silence, but it seemed right to us to congratulate the lads, who had a great game," Napoli's sporting director Cristiano Giuntoli said. "We lost tonight because of decisions that weren't just debatable, but were shameful and hurt Italian football. "The first penalty shouldn't have been given, and the second was even less of a penalty because (Napoli goalkeeper Pepe) Reina got the ball ... Ours was a penalty. This referee is shameful. Congratulations to the team." Napoli's Kalidou Koulibaly was judged to have tripped Paulo Dybala shortly after halftime and the Argentina forward dusted himself off before firing the resulting spot-kick into the bottom left corner, sending Reina the wrong way. Juve's second penalty came five minutes after former Napoli striker Gonzalo Higuain had made it 2-1. Napoli goalkeeper Pepe Reina appeared to get the ball but also brought down Juan Cuadrado following a swift counterattack. Dybala converted into the same corner. Napoli's players were also angered by the referee ignoring their claims for a penalty moments earlier for what appeared to be a foul on Raul Albiol, which led to the counterattack. "The result changed only because of the refereeing decisions," Reina said. "What should I have done on Cuadrado? Disappear? If I get the ball I get the ball, it's not a penalty. "And no one's talking much about the penalty on Albiol," the Napoli keeper added. "That was more a penalty than the other... Tonight the result was decided by refereeing mistakes, the whole of Italy saw it." Higuain's goal came shortly after the hour. A corner was played out to Cuadrado and his cross into the box was inadvertently headed to Higuain by Koulibaly and the forward slotted it in from a tight angle. Higuain, who had netted the winner when the two sides met in the league earlier this season, joined Juventus for an Italian-record 90 million euros ($100 million) after scoring a league-record 36 goals for Napoli last campaign. Juventus defender Giorgio Chiellini later brushed off the controversy surrounding the penalty decisions. "It's bar talk," Chiellini said. "After Roma's win at Inter on Sunday, everyone talked about refereeing decisions and not about Roma's great performance. And it's the same thing tonight. We're used to it, we're thinking about the actual football and the mistakes we made, we will have to sweat hard in Naples." The return leg will be played on April 4. The winner will meet either Lazio or Roma, which play the first leg of their cup derby on Wednesday.
#Juventus #Napoli #Italian soccer Serie A
You May Also like: