Nepal lose to HK by 3-wicket, fail to qualify for Asia Cup 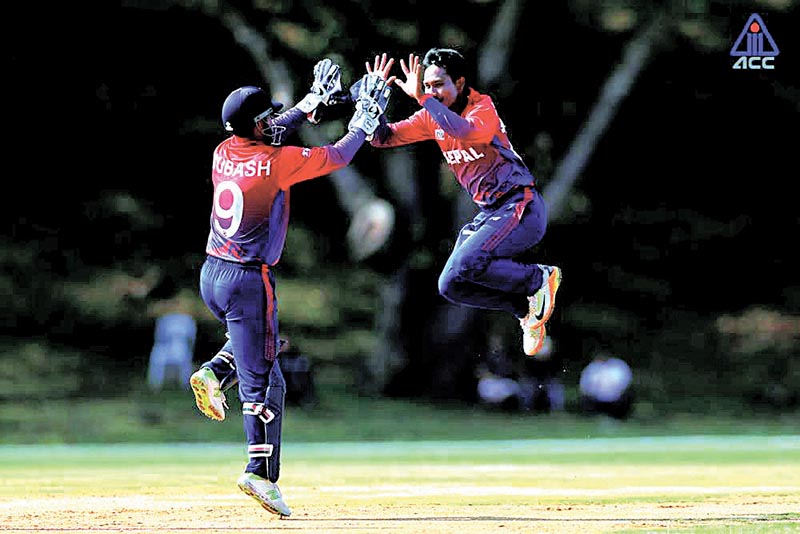 KATHMANDU: Nepal lost to Hong Kong by three wickets in the final match of the ongoing Asia Cup Qualifiers played at Bangi of Selangor in Malaysia today.

With today's defeat, Nepal failed to qualify for Asia Cup to be held in the United Arab Emirates on September 15.

After winning the toss, Nepal managed to muster a paltry score of 95 runs all out inside 38 overs of their allotted 50 overs game. Hong Kong cantered to victory with three wickets and 105 balls to spare.

Nepali star leg-spinner Sandeep Lamichanne's five-wicket haul was not enough to take his team home as man-of-the-match Anshuman Rath stood in his way with a composed inning of 52 runs.

Lamichanne's magical spell nearly tormented formidable Hong Kong with his figure of 10-2-27-5. Basanta Regmi and Sagar Pun picked a wicket each. Rath played a match-winning knock of 52 runs off 82 balls studded with three fours and a maximum.

Aarif Sheikh top-scored for Nepal with 18 runs off 53 balls with two hit to the fence. Ehsan Khan, the off-break bowler, was the pick of the Hong Kong bowler with 7.5-1-15-4.

Tanwir Afzal, Aizaz Khan scalped two wickets each and Ehsan Nawaz, Nadeem Ahmed chipped in with a wicket each.

With an empathic victory over the Himalayan nation, Hong Kong qualified for the Asia Cup with a better run rate over Oman. Both the teams have accumulated seven points each from five games.

After today's final group match of the six-team tournament, Nepal garnered four points to secure the fourth spot above the hosts Malaysia and Singapore.