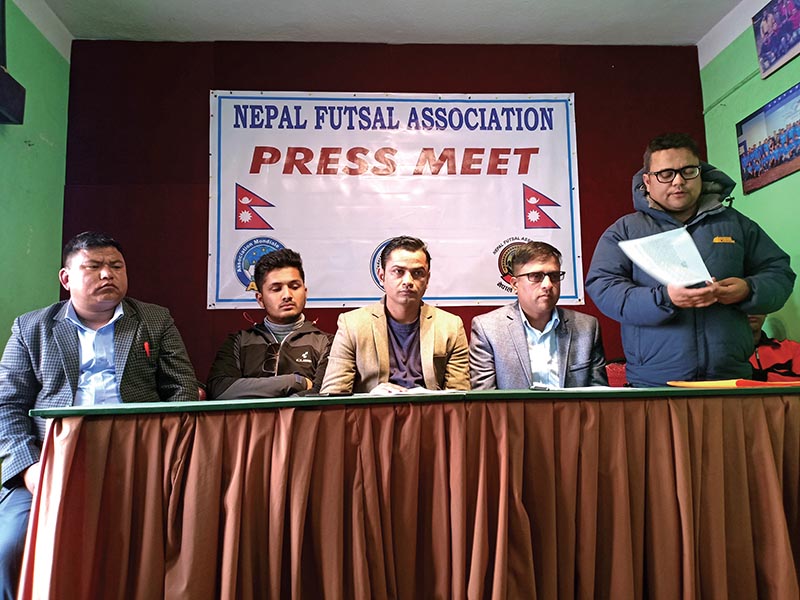 Nepal Futsal Association officials at a press meet in Kathmandu on Monday. Photo: THT
Kathmandu, February 4 Nepal is all set to participate in the Futsal World Cup to be held in Argentina after it received wild card from the International Futsal Federation (AMF). According to Nepal Futsal Association, Nepal received the wild card after the national team impressed the governing body officials with its performance in the triangular series held in Pakistan last year. “We have participated in a couple of international tournaments and our players have put in their best shows. It’s a matter of pride for us to get the chance to participate in the World Cup,” said NFA General Secretary Bat Krishna Thapa at a press meet today. Thapa also informed that the national team to represent the country in the World Cup, slated for March 31 to April 7, will be picked up after an open selection on Friday. “We have our national team but we are organising the selection to pick up the best side to compete in the tournament which will be participated in by 16 nations,” he said. He said a 17-member team — 12 players and five officials — will go to Argentina to participate in the event. Asked about the coordination with National Sports Council and All Nepal Football Association, Thapa said the AMF had a different structure and that they did not need to take permission from ANFA. “We are registered with the NSC and we have already informed about our participation to Ministry of Youth and Sports,” said Vice-president Santosh Parajuli.”We have a different structure and the rules of the game are also different to that of FIFA. Actually, the AMF is the governing body of futsal and FIFA has nothing to do with this,” he added.
#Nepal #Argentina #Nepal Futsal Association #Futsal World Cup #International Futsal Federation (AMF)
You May Also like: