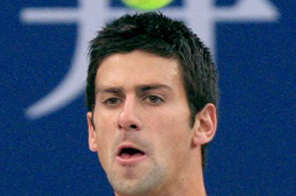 BEIJING: Novak Djokovic captured his third ATP title of the year at the China Open, outlasting giant-killer Marin Cilic of Croatia in a blistering baseline battle, 6-2, 7-6 (7/4).
The Serbian second seed took advantage of a 90-minute rain delay, which came at 2-2 in the first set, coming back on centre court at the Beijing Olympics tennis venue with sharper ground strokes and well-placed serves.
The big-hitting Cilic -- who beat fourth seed Nikolay Davydenko and top seed Rafael Nadal en route to the final -- kept up a barrage of huge shots from the backcourt but Djokovic mixed up the pace to throw him off, forcing errors.
Djokovic, by reaching the final, is assured of taking over the world No 3 ranking on October 19, surpassing injured Scot Andy Murray.

#New No.3 beats Cilic to win China Open
You May Also like: