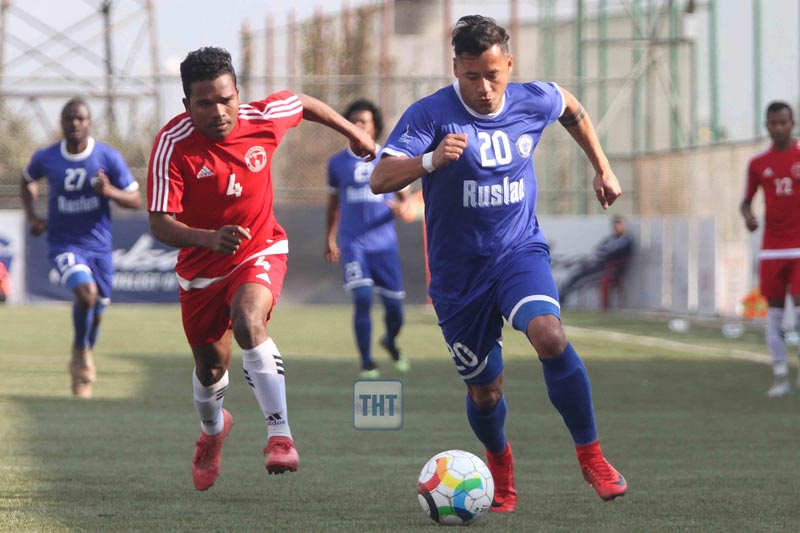 Anil Gurung (right) of Three Star Club dribbles the ball agianst Sanoths Hemrum of Nepal Police Club during their Pulsar Martyr’s Memorial ‘A’ Division League match at ANFA ground in Lalitpur on Friday, December 28, 2018. Photo: Udipt Singh Chhetry
Kathmandu, December 28 Nepal Police Club came from behind to stun Ruslan Three Star Club 3-1, while Tribhuvan Army Club hammered Saraswoti Youth Club 4-0 in the Pulsar Martyrs Memorial A Division League here at the ANFA Complex grounds today. Nir Kumar Rai, Abishek Rijal and Bhola Silwal scored one goal each for NPC after Abang Albert had put Three Star ahead. With the win, NPC climbed to fifth position with 18 points from 11 matches, while Three Star remained at third with 23 points. Albert gave an early lead to Three Star in the 13th minute when he headed home following a pass from Nirajan Khadka. A minute after NPC custodian Arpan Karki punched out Ranjit Dhimal’s free kick, the departmental side levelled the scores. Rai capitalised on defensive error from Peter Segun before burying the ball into the goal in the 20th minute. NPC took the lead in the 47th minute from the spot. Bijay Dhimal handled the ball inside the box and Rijal converted the resulting penalty. Silwal made it 3-1 in the 57th minute when his brilliant shot left Three Star goalkeeper Alan Neupane stranded. Ranjit Dhimal and Three Star were unlucky for the second time in the match as NPC keeper Karki saved a penalty in the 85th minute. Three Star earned a chance to reduce the deficit after Hem Tamang handled the ball inside the box but Karki made a brilliant dive to stop the ball with his legs. In another match, skipper Bharat Khawas scored a brace and Nawayug Shrestha netted one for TAC, who were also gifted with an own goal from Kadiri Ibrahim. TAC accumulated 21 points from 11 matches and are at the fourth position. SYC remained at 10th with 10 points. TAC took an early lead through Shrestha’s header goal following a cross from Deepak Gurung in the seventh minute. SYC were reduced to 10 men in the 29th minute when Susan Lama received the marching orders for second bookable offense after he brought down Khawas inside the penalty area. Khawas converted the penalty to double the lead. TAC extended the lead in the 62nd minute when Khawas scored his second goal of the match. Khawas netted in rebound after SYC goalkeeper Pradip Bhandari spilled a free kick from Santosh Tamang. Ibrahim scored into his own nets in the 80th minute while trying to clear an attempt from Khawas.
#Tribhuvan Army Club #Nepal Police Club #ANFA Complex #Ruslan Three Star Club #Saraswoti Youth Club #Pulsar Martyrs Memorial
You May Also like: