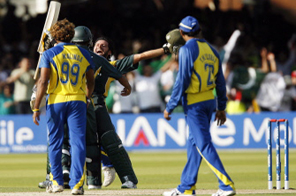 Shahid Afridi (C, back) celebrates with Shoaib Malik of Pakistan after winning their match against Sri Lanka during the ICC Twenty20 Cricket World Cup final at Lords in London on June 21, 2009. Pakistan won their first major title in 17 years when they stunned Sri Lanka by eight wickets in the World Twenty20 final at a sell-out Lord's. Source: AFP PHOTO/Glyn Kirk

LONDON: Pakistan won their first major title in 17 years when they stunned Sri Lanka by eight wickets in the World Twenty20 final at a sell-out Lord's here on Sunday.

Shahid Afridi hit an unbeaten 54 off 40 balls, his second consecutive half-century, and former captain Shoaib Malik made 24 not out during a match-winning partnership of 76 for the undefeated third wicket.

Pakistan, runners-up to India in the final of the inaugural World Twenty20 in South Africa two years ago, ended Sri Lanka's unbeaten run in the tournament with style.

Pakistan last won an offical multi-nation tournament in 1992 when Imran Khan's team lifted the World Cup by beating England in the final at the Melbourne cricket ground in Australia.

Sunday's win by Younus Khan's team gave Pakistanis back home reason to cheer as the cricket-mad nation has been deprived of international tours due to security concerns in the volatile nation.

The International Cricket Council has already ruled out holding World Cup matches in Pakistan in 2011 following the militant attack on the Sri Lankan team in Lahore on March 3.

Pakistani openers Kamran Akmal and Shahzaib Hasan ensured there were no early scares as they put on 48 for the first wicket in seven overs.

Sanath Jayasuriya broke through with his first delivery in the next over when he beat Akmal in the air with his left-arm spin and had him stumped for 37 off 28 balls.

Jayasuriya then took a catch to get rid of Shahzaib off Muttiah Muralitharan for 19, but Afridi and Malik took Pakistan home amid loud celebrations from their fans in the stands.

Sri Lanka were dealt quick blows after captain Kumar Sangakkara won the toss and elected to take first strike on a slow wicket.

The Lankans slumped to 2-2 in the first nine balls and that became 34-4 before Sangakkara himself led the rescue act with a defiant unbeaten 64 from 52 balls.

Sangakkara and Angelo Mathews put on 68 for the unbroken seventh wicket as Sri Lanka plundered 59 runs in the final five overs.

Mathews returned unbeaten on 35 off 24 balls.

Pakistan got off to a sensational start when teenage fast bowler Mohammad Aamir sent back the in-form Tillekaratne Dilshan with the fifth ball of the match.

Dilshan, the tournament's leading scorer with 317 runs, miscued a pull shot off the speedy left-armer and was caught at backward square-leg by Shahzaib Hasan for zero.

Four balls later, Shahzaib grabbed his second catch at mid-off as Jehan Mubarak skied a leading edge off Razzaq, who shared the new ball with Aamir.

Jayasuriya counter-attacked with a six and four in Razzaq's second over, but the bowler hit back two balls later as the left-handed veteran edged a ball on to his stumps after making 17.

Razzaq, who replaced the injured Yasir Arafat after ending his links with the rebel Indian Cricket League, struck again in his third over when Misbah-ul Haq dived to his right at slip to remove Mahela Jayawardene for one.