'Proud' McCullum set for another milestone with 100th test 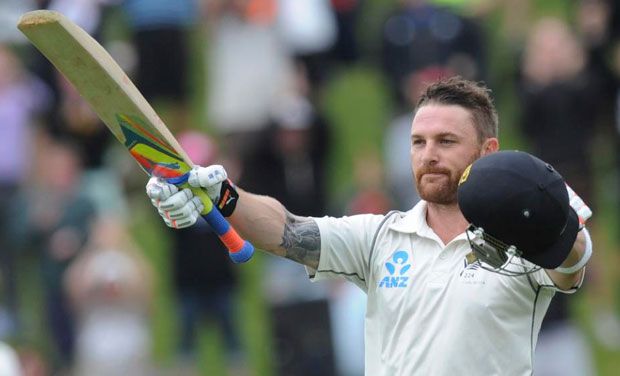 File photo of Brendon McCullum. Photo: AP
WELLINGTON: As the clock ticks down on Brendon McCullum's international career, the New Zealand captain will achieve one more milestone on Friday in the first test against Australia at the Basin Reserve. The 34-year-old will become the third New Zealander to play 100 test matches for his country, behind Daniel Vettori (112), who played one for a World XI in 2005, and Stephen Fleming (111). McCullum, who is to retire from all international cricket after the second test at Hagley Oval in Christchurch that starts on Feb. 20, has played all 100 of his tests in succession since debut, which is a world record. South Africa's AB de Villiers played 98 successive tests from debut, a run that ended last January. Allan Border played 153 successive tests for Australia, though not all from his debut. "To be able to play 100 straight tests ... I'm pretty proud of that," McCullum told reporters at the Basin Reserve on Thursday. "Not only the longevity but being able to overcome injuries and the toughness of touring and the ups and downs with performances and still being able to pick yourself back up ... and warrant a place in the team is something you can look back on with a bit of pride." Initially a swashbuckling wicketkeeper-batsman when he made his debut against South Africa in Hamilton on March 10, 2004, McCullum gave the gloves away in the longest form of the game in 2010 as he fought a painful, chronic back condition. He floated up to the top of the order after that, scoring his first double century against India in November 2010 at Hyderabad, but once he assumed the captaincy he settled into the middle order, where he has played 19 of his last 22 tests. Batting at number five, McCullum scored New Zealand's first test triple century, against India at the Basin Reserve two years ago, but it is the development of the side since that match is what McCullum said he would remember the most. "The last 15-20 tests have been an incredible part of (my) life," he said. "The changes we have been able to make and the evolution in the environment and the performances we have been starting to put up. "For me it's about dirty whites, sweaty black caps, a beer in hand and you're able to look back on hard work achieved ... with a sense of pride."
#Brendon McCullum #Stephen Fleming #international career #Basin Reserve #New Zealand-Australia test match #Daniel Vettori
You May Also like: