Pujara torments Australia with third century as India march on 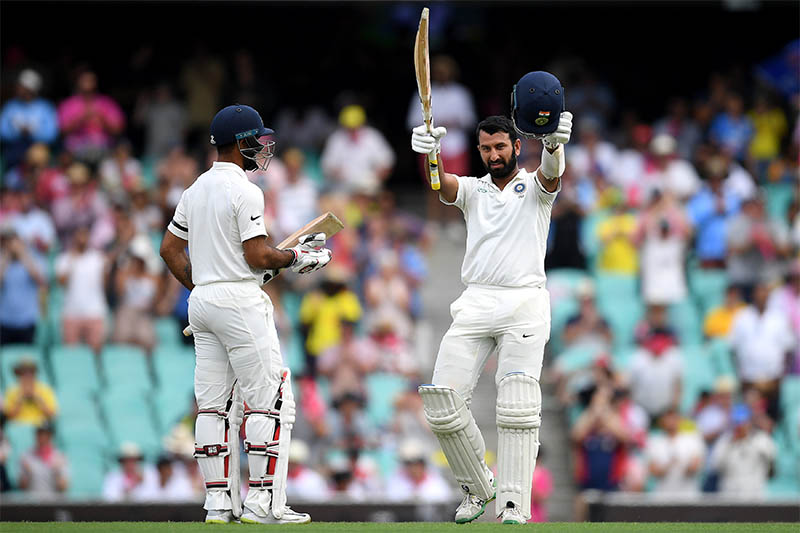 India's Cheteshwar Pujara celebrates scoring his century on day one of the fourth test match between Australia and India at the SCG in Sydney, Australia, January 3, 2019. Photo: Reuters
SYDNEY: Cheteshwar Pujara put Australia to the sword with an unbeaten 130 in India's 303 for four on the opening day of the fourth test on Thursday, keeping the tourists firmly on track for a historic breakthrough with his third century of the series. The hosts, desperately scrapping to avoid being the first Australia team to lose a series to India on home soil, had their successes and managed to dislodge Mayank Agarwal after a bright 77, Virat Kohli for 23 and Ajinkya Rahane for 18. Pujara, however, would just not budge and eked out his innings at a rate of little more than a run every other ball to take his series tally to 458 and add another century to those that helped India to wins in Adelaide and Melbourne. Those victories to Australia's one win in Perth means India need only to avoid defeat in the final test at Sydney Cricket Ground to secure their maiden test series triumph Down Under. Again India's rock, Pujara put together partnerships of 116 with Agarwal, 54 with Kohli, 48 with Rahane and finished the day with an unbroken stand of 75 with Hanuma Vihari, who will resume on day two on 39 not out. "It's great to watch him from the other end, the way he grinds the bowlers," Agarwal said. "We're very happy. We would have liked to be probably three down but 300 for for four on the first day after choosing to bat, I think we're in a great position." Australia's bowlers laboured manfully on a hot day but it was hard to avoid the conclusion that they were firmly behind the eight-ball from the moment Tim Paine lost the toss. India have never lost a test match when Kohli has won the toss -- winning 18 and drawing three -- but more importantly the tourists had the opportunity to bat the Australians out of the game as they did in Melbourne. Josh Hazlewood struck early on a wicket with a greenish tinge to remove KL Rahul for nine but that only brought Pujara to the crease to join Agarwal, the senior man initially happy to let the opener take the scoring load. HOSTILE BOWLING Agarwal faced some hostile short bowling from the Australian pacemen, brushing off blows to his elbow and helmet as Mitchell Starc, in particular, gave him a thorough going over. After adding a second half century to add to his first on debut in Melbourne, the 27-year-old opened up with a couple of sixes off Nathan Lyon only to hole out to Starc at long-on going for a third. Kohli announced his arrival at the crease with a four punched through extra cover but fell straight after tea when a Hazlewood delivery down the leg side caught his glove and flew to Paine behind the stumps. Left-armer Starc has come under some criticism for his bowling in this series but there was nothing wrong with the angled bouncer that accounted for Rahane, who also gloved behind to Paine. Pujara, meanwhile, had no time for too many expansive strokes and it summed up his innings that his 18th test century came up when he swatted the 199th ball he faced to fine-leg and it just about reached the boundary rope for his 13th four. "He was classy, wasn't he? His time, his patience, he was just very good," said Australia batsman Marnus Labuschagne, whose part-time spin bowling took a bit of a battering from Pujara. "That's what we're going to have to do and put a big score on the board." READ ALSO:
#Virat Kohli #Cheteshwar Pujara #Tim Paine
You May Also like: