Punjab pulls off sensational 4-run win over Delhi in IPL 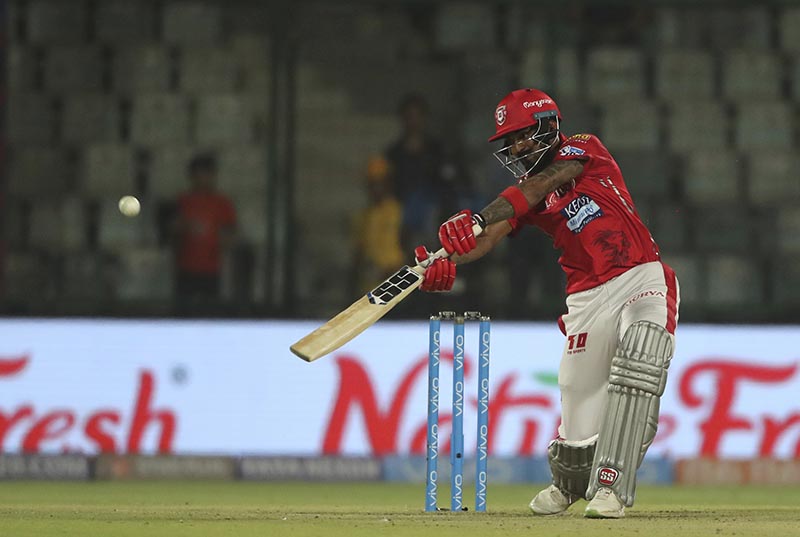 Kings XI Punjab's K L Rahul plays a shot during the VIVO IPL Twenty20 cricket match against Delhi Daredevils in New Delhi, India, on Monday, April 23, 2018. Photo: AP
NEW DELHI: Needing five runs off the last ball to win, Shreyas Iyer went for the big hit. And holed out at long off, allowing Kings XI Punjab to sensationally beat Delhi Daredevils by four runs in the Indian Premier League on Monday. Delhi, chasing 144 to win, ended up at 139-8 and on the bottom of the table with only one win from five matches. Punjab swiftly moved into a share of the lead with Chennai Super Kings after its fourth win from five games. For the last over, Punjab skipper Ravichandran Ashwin gave the ball to 17-year-old mystery spinner Mujeeb Ur Rehman of Afghanistan. Delhi needed 17 runs. Rehman conceded 0-6-0-2-4 then Iyer's final hit, which was caught by Aaron Finch. "If we were serious about winning, this is a game we needed to win," Ashwin said. "They wanted to attack, which fell into our hands." Punjab missed Chris Gayle at the top of the order. He was rested, sore from three big knocks in his team's three successive wins. The other in-form Punjab opener Lokesh Rahul (23) fell inside the batting powerplay when he tried to scoop Liam Plunkett (3-17) but was caught at short fine leg. Karun Nair (34) and Mayank Agarwal (21) both got starts before falling to Plunkett, who made a dream debut in Delhi's four-man seam attack only after Kagiso Rabada was ruled out of the IPL because of a back injury. Seamers Trent Boult (2-21) and Avesh Khan (2-36) also picked up wickets as Punjab lost them at regular intervals to slip to 143-8. But Delhi paid the price for dropping David Miller on 6 and 10 in successive overs. He went on to score 26 off 19 balls. Delhi's chase ran into early trouble when it lost Glenn Maxwell (22) and captain Gautam Gambhir (4) inside the first five overs to be reeling at 42-3. Mujeeb then clean-bowled dangerman Rishabh Pant (4) off his first delivery and, when Daniel Christian was run out, Delhi had lost half of the side for 76 in 12 overs. Iyer and Tewatia brought Delhi back with a 47-run stand, then Andrew Tye (2-25) deceived Tewatia off a slower delivery and had him caught behind. Iyer raised his half-century with a straight six off Mujeeb in the last over, and his valiant 57 went in vain on the last ball of the match. "When you lose three wickets in the first six overs, it's always difficult," Gambhir said. "We've got to win seven games. Our bowling was good today, but couldn't cross the line." READ ALSO:
#Ravichandran Ashwin #IPL #Delhi Daredevils #Kings XI Punjab #Shreyas Iyer #Indian Premier Leauge
You May Also like: