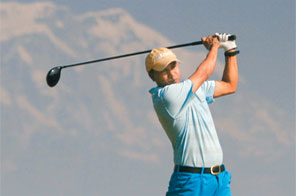 Rajan Thapa takes tee shot on the third hole during the first round of Surya Nepal Western Open at Himalayan Golf Course in Pokhara on Sunday. Source: Udipt Singh Chhetry

POKHARA: Rajan Thapa carded one-over 74 to take a three-stroke lead over Rabi Khadka on the first day of the Surya Nepal Western Open here at the Himalayan Golf Course today.
Rajan started with a par on the first hole and made a five-foot birdie on the par-3 second hole but dropped a shot on the fifth. He birdied the par-5 sixth hole and made consistent pars on the next three holes to finish the front nine at one under 36. But Thapa dropped a shot on the par-3 10th and played consistently until dropping a shot on the last hole by missing a short par putt. His putting was excellent given the tough condition of the course, making 24 putts overall.
Khadka is three-stroke adrift of the leader at four over 77. Khadka had a disastrous front nine score of five-over 42. He started with a double-bogey and dropped another shot on the third before having a triple-bogey in the ninth hole. He had a lone birdie on the par-5 sixth. Khadka, however, bounced back strongly with one-under 35 in the back nine. He had birdies on Hole Nos 11 and 13 beforing dropping a shot on the par-4 17th hole.
Surya Sharma is five shots behind the leader after carding six-over 79 for the third position. Sharma finished the front nine with two-over 39 and ended up the day with four-over 40 on the return. Surya made two birdies on second and par-five sixth to go with six bogeys and a double bogey.
Nepal No 1 Shiva Ram Shrestha shared fourth position with No 1 amateur Rupak Acharya with the score of seven-over 80. Shiva Ram had a good start, with his first birdie on the sixth but dropped a shot on the very next hole. He closed with a bogey on the ninth hole for a one-over 38 on the front nine. On his way back, Shiva Ram had a disastrous triple-bogey on Hole No 11 and 13 and made yet another bogey on the 14th before sinking a birdie on the 16th for a total of 42.
Deepak Acharya and Deepak Thapa Magar are tied for the sixth position with the score of nine-over 82. One stroke further is Pashupati Sharma. Rupak, younger brother of Deepak, leads amateur field with a huge 10 strokes cushion over his closest rivals Dipendra Rayamajhi and Puskar Rajbahak, both of whom shot 17-over 90.
First Round Scores (Pros): 74 Rajan Thapa; 77 Rabi Khadka; 79 Surya Prasad Sharma; 80 Shiva Ram Shrestha; 82 Deepak Acharya and Deepak Thapa Magar; 83 Pashupati Sharma; 84 Ram Thapa, Deepak Neupane; 85 Sabin Sapkota, Mani Rai; 86 Sanjay Lama; 87 Ramesh Nagarkoti; 88 Sachin Bhattarai, Krishna Hari Mizar; 90 Tham Bahadur Rai; 91 Krishna Man Rajbahak, Ram Krishna Shrestha; 92 Uttam KC, Jay Ram Shrestha; 93 Rajendra Phuyal, CB Bhandari, Raj Pradhan; 100 Dhana Thapa. Amateurs: 80 Rupak Acharya; 90 Pushkar Rajbahak, Dipendra Rayamajhi; 91 Pradeep K Lama, Samundra Giri, Man Lachhmi Prasad Gurung; 92 Om Thakuari; 95 Bhuwan Pudasaine, Maj Madan Gurung; 96 Neeraj SJB Rana; 99 Sundar Rai; 108 Sabin Rana; 111 Dinesh Prajapati; 115 Sanjiv CK.