The little-known Rawal led the TAC clean sweep in men’s section winning the 42.195km race in two hours, 33 minutes and 10 seconds in his first appearance. 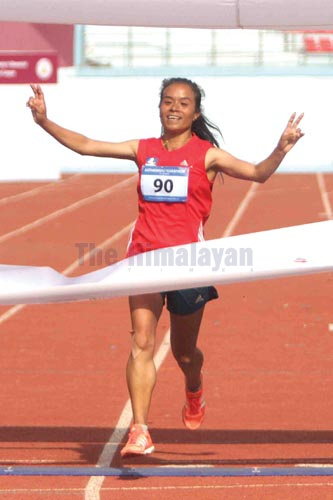 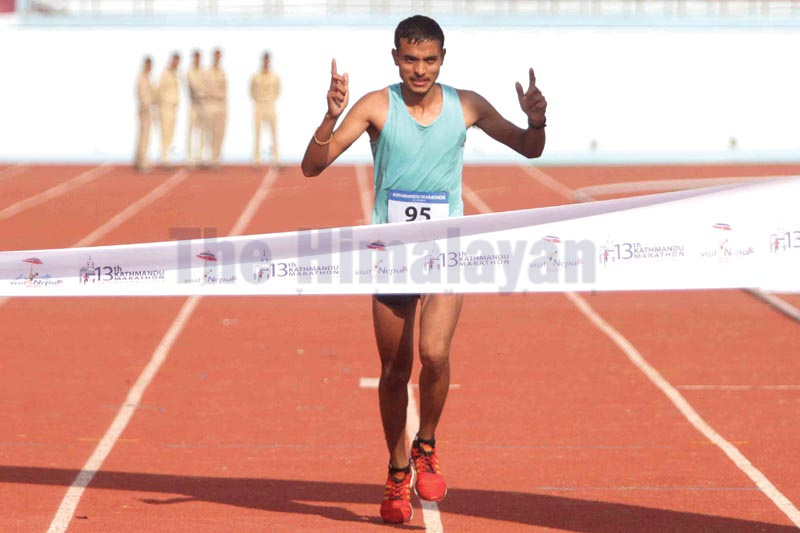 “After missing the eighth National Games and 13th SA Games due to my personal family reasons, I participated in this event with an aim of completing the hat-trick,” said Koju. “Pushpa Bhandari broke my national record in the SA Games marathon and my next target will be to get that back,” she added.

Sarita Basi of TAC was second in 3:19:07, while Nirjala Tamrakar came third in 3:45:47. Tamrakar, who switched to triathlon from cycling and bagged bronze medal in the recently-concluded 13th South Asian Games, tried her hands in marathon for the first time and finished on the podium. Top three athletes in both categories received Rs 50,000, Rs 20,000 and Rs 15,000 respectively.

Nepal APF Club athlete Ajit Kumar Yadav and TAC’s Olympian Saraswoti Bhattarai won the 5km race. Yadav, the gold medallist of the Junior Asian Championship who missed the SA Games due to ill health, finished the race in 17 minutes and 19.91 seconds, ahead of TAC duo Gajendra Rai (17:30.63) and Shiva Bahadur Rayamajhi (17:53.22). Yadav had made the comeback from the Dhara Nepalgunj Marathon last month winning the 10km race.

The Rio Olympic Games participant, Bhattarai won the women’s section title with the timing of 22 minutes and 03 seconds, while Birshana Kumal (22:09) and Kajal Bista (23:31) came second and third.

The annual event was organised by ProSports and supported by Province-3 government along with municipalities of Kathmandu, Lalitpur, Bhaktapur and Madhyapur Thimi.