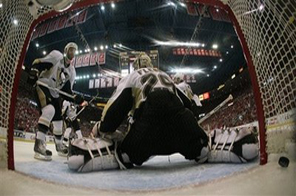 A shot by Detroit Red Wings' Niklas Kronwall, not shown, gets past Pittsburgh Penguins goalie Marc-Andre Fleury (29) for a goal in the second period of Game 5 of the NHL hockey Stanley Cup finals in Detroit, Saturday, June 6, 2009. Fleury gave up all five goals in the Penguins' 5-0 loss. At left is Penguins defenseman Brooks Orpik Source: AP

DETROIT : The Detroit Red Wings sure don't look tired now. After watching their two-game lead in the Stanley Cup finals disappear in Pittsburgh, the defending champions returned to the friendly confines of Joe Louis Arena and blew away the supposedly fresher Penguins 5-0 in Game 5 on Saturday night.
The veteran-laden Red Wings lead the series 3-2 and they moved within one win of their 12th Stanley Cup title and fifth in 12 seasons. Detroit can wrap this one up Tuesday night in Pittsburgh, but the home team is 5-0 in the rematch of last year's finals.
Pavel Datsyuk made his mark in his first appearance in eight games, notching two assists, drawing a key penalty, and knocking leading scorer Evgeni Malkin to the ice. The Red Wings made the Penguins pay for a lack of discipline by going 3 for 9 on the power play in front of a crowd that celebrated most of the night.
Chris Osgood, on the verge of his fourth Stanley Cup championship third as the Red Wings starting goalie made 22 saves for his 15th playoff shutout. He earned an assist on Valtteri Filppula's goal for his fifth career playoff point, and improved to 11-4 in the finals. Osgood has two shutouts in this year's playoffs.
Detroit held a 29-22 shots advantage, the first time the home team had the edge.
This series looked firmly in the Red Wings' control after they opened with a pair of 3-1 victories, but the Penguins seized momentum with two 4-2 wins that made Detroit appear a bit worn out.
With the first five games played in eight nights, the hectic schedule seemed to catch up with the Red Wings. Now the playoff-tested veterans can enjoy two days off before Game 6. There will be another two-day break should the Penguins force a Game 7 back in Detroit on Friday.
"Now age has nothing to do with it," Red Wings coach Mike Babcock said. "There are two days off between games."
History suggests the Red Wings will hoist the Cup again as 14 of the 19 previous teams to win Game 5 in a series tied 2-2 have prevailed.
Pittsburgh won Game 5 in the Motor City last year in triple overtime to force the series to six games, but then was eliminated at home. The Penguins are 1-5 in Detroit in the past two finals, and captain Sidney Crosby failed to score a goal in all six games.
The Red Wings broke the game open with four goals in the second period against beleaguered Penguins goalie Marc-Andre Fleury, who left after making only 16 saves on 21 shots. It wasn't the bouncy end boards that did him in this time, as they tormented him in the first two games of the series, but rather a suddenly potent power-play by the Red Wings.
Filppula started the barrage 1:44 into the second period when he made it 2-0 just 5 seconds after Chris Kunitz served a penalty for interfering with Osgood. That was the only even-strength goal of the period.
Niklas Kronwall pushed the lead to three goals at 6:11, 18 seconds into Sergei Gonchar's slashing penalty on Datsyuk. Fellow defenseman Brian Rafalski made it 4-0 at 8:26, and Henrik Zetterberg last year's playoff MVP closed the spurt at 15:40.
That chased Fleury to the bench in favor of backup Mathieu Garon, who made his first playoff appearance since 2004.
Datsyuk, who had been sidelined since injuring his foot in Game 2 of the Western Conference finals, wasted little time in making his presence felt. First, he knocked Malkin hard off the puck behind the net and then made the final pass to set up Dan Cleary's goal in the first period.
Datsyuk and Cleary rushed into the Pittsburgh end with Gonchar and Brooks Orpik back on defense. Datsyuk slid a pass to Cleary, who wound up from a few feet above the right circle and zipped a shot between Orpik's legs and past a screened Fleury at 13:32.
"He did very well for being off for as long as he has been," Rafalski said. "He wasn't 100 percent Pavel Datsyuk, but I will take 85 percent of Pavel Datsyuk than 100 percent of other guys."
Cleary scored his seventh goal in 11 games, but he hadn't registered a point in the finals.
Chants of Datsyuk's name filled the arena, replaced by calls of "We Want the Cup" as the final minutes ticked down, and others saluting Osgood.
The first period didn't have a stoppage after the opening faceoff until Kronwall went off for tripping at 7:16. The fast-faced frame turned decidedly in the Red Wings' favor when they killed off the penalty without allowing a shot.
Pittsburgh had converted on four of nine power-play chances against the Red Wing's much-maligned penalty-killers in the first four games of the series.
"Getting that first kill was a big boost for us and gave us confidence going forward," Rafalski said.
Detroit's power play was 1-for-10 before its big night.
"We just took too many penalties, and against this team it's only a matter of time before their power play starts to turn it around," Penguins defenseman Rob Scuderi said.
Notes: @ Detroit is 11-1 at home in the playoffs. ... Malkin, who leads with 35 playoff points, took three of Pittsburgh's nine minor penalties. ... Red Wings captain Nicklas Lidstrom played in his 233 NHL postseason game, tying former D Scott Stevens for fifth place on the career list. Current Detroit D Chris Chelios, who hasn't played in this series, leads with 266. ... The Red Wings haven't lost three straight in regulation since March 27-April 2. ... Pittsburgh was 0-for-2 on the power play.

#Red Wings rush toward repeat #rout Penguins 5-0
You May Also like: