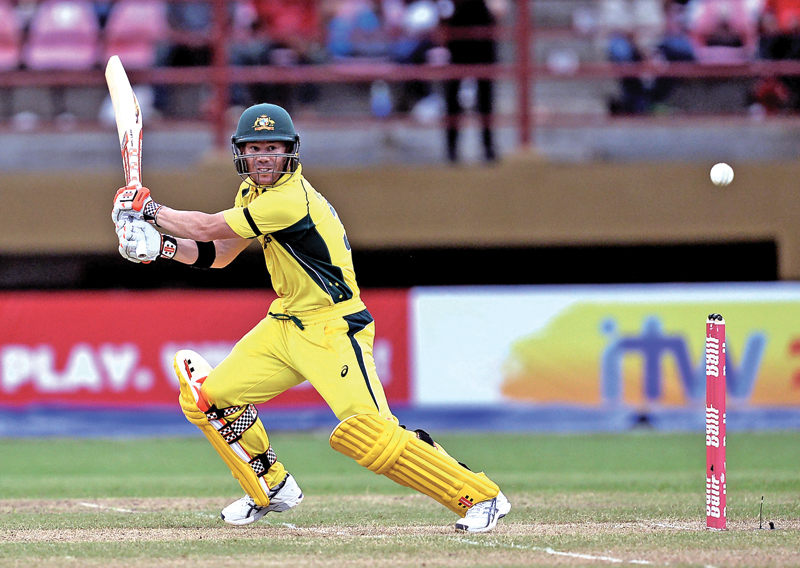 Australia's David Warner plays a shot. Photo: AFP
MELBOURNE: Opener David Warner smashed his seventh one-day international century for the year to fire Australia to a resounding 117-run win and a 3-0 series sweep of New Zealand at the Melbourne Cricket Ground on Friday. The pugnacious left-hander's majestic 156 from 128 balls rescued the home side after they stumbled to 73-4 before recovering to a total of 264 for eight at the Melbourne Cricket Ground. Pace spearhead Mitchell Starc took 3-34 as New Zealand's batsmen were skittled for 146 in 36.1 overs. Having already scored the most ODI tons in a year by an Australian, Warner drew level with the seven tallied by India's Sourav Ganguly in 2000. Indian great Sachin Tendulkar, who made nine in 1998, is the only player to have scored more. "It's always special when you put runs on the board, but credit to the bowlers ... they really executed today," said Warner, who was named man-of-the-match and the series. "I'm hitting the ball well but I've got to keep on training." After his usual run and jump into the air upon raising his hundred, Warner added his new celebration, holding his right hand into the air and his left, holding the bat, to his chin. He said it was a nod to his team mates who had given him a new nickname, 'the Reverend'. "The boys call me 'the Rev' now because they reckon 'the Bull's been tamed a little bit," said vice-captain Warner, a notorious hothead in previous seasons. Warner, who hit a match-winning 119 in the second match in Canberra on Tuesday, was dismissed with the last ball of the innings, run out by paceman Trent Boult after having blasted 13 fours and four sixes. Openers Martin Guptill and Tom Latham started New Zealand's chase positively, moving to 44 before Latham threw his wicket away for 28 with a flick straight to square leg. After Kane Williamson's dismissal for lbw on 13 by James Faulkner, the wheels fell off for the touring side, who lost three wickets for nine runs in three overs. Captain Steve Smith was dismissed for a duck but wrapped up the win by taking a brilliant one-handed, diving catch at slip to remove New Zealand number 11 Trent Boult for one. Whitewashed 5-0 away to South Africa, Australia were back to their best on home pitches. "It was a nice way to finish... We needed some improvement after South Africa and we certainly showed that here," said Smith. "We've just done the basics really well and when you do that, especially on your home grounds, you go a long way to winning games of cricket."
#New Zealand #Mitchell Starc #Kane Williamson #Melbourne Cricket Ground #David Warner
You May Also like: