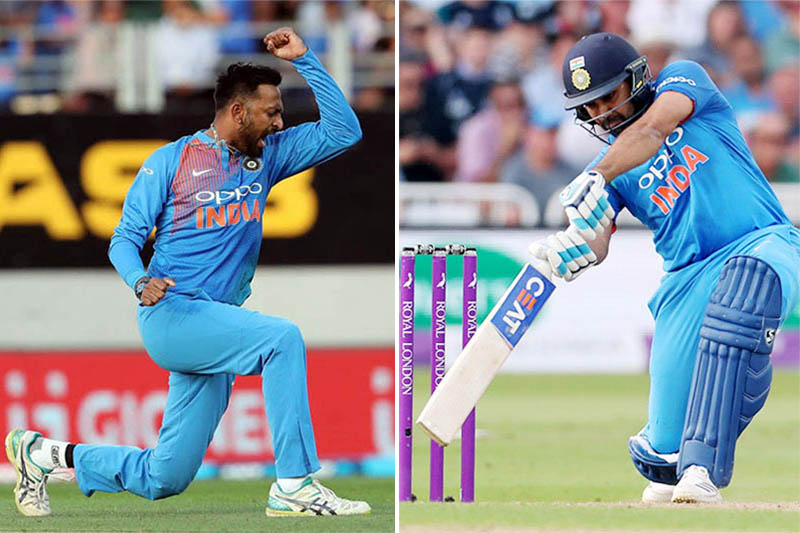 File: India's Krunal Pandya (left) and Rohit Sharma. Photo: Reuters
AUCKLAND: Stand-in skipper Rohit Sharma cracked a blistering half-century as India outclassed New Zealand by seven wickets in the second Twenty20 international on Friday and levelled the three-match series at 1-1. Chasing 159 for victory, Rohit's 29-ball 50 and Shikhar Dhawan's 30 laid the perfect platform as India cruised home with seven balls to spare at Auckland. Rishabh Pant, who scored an unbeaten 40, finished the job in the company of experienced wicketkeeper Mahendra Singh Dhoni as India quickly overcame the disappointment of an 80-run defeat in the opening match of the series. "Very pleased to see how we bowled and then we were clinical with the bat as well," Rohit, who overtook Martin Guptill as the highest scorer in the format with 2,288 runs, said. "We didn't execute plans in the first game, we executed them here and got the reward for it. It's important to understand the mistakes we made. "We wanted the guys to go out there with a clear mind. We have got quality in our side and we are looking forward to the next game. Hopefully, we can do what we did today." Earlier, left-arm spinner Krunal Pandya dented the Kiwi top-order to finish with figures of 3-28 in four overs. The 27-year-old removed Colin Munro, Daryl Mitchell and Kane Williamson in quick succession. Mitchell was given out leg before to a controversial review with HotSpot technology clearly showing a mark when the ball passed the inside edge of the bat before hitting his pads. Ross Taylor and Colin de Grandhomme provided some late fireworks with scores of 42 and 50 respectively but India's bowlers managed to keep control of New Zealand's scoring rate. The final T20 will take place in Hamilton on Sunday.
#Rohit Sharma #India vs New Zealand #Krunal Pandaya #T20 Int'l series
You May Also like: