Roma refuse to surrender against Barcelona 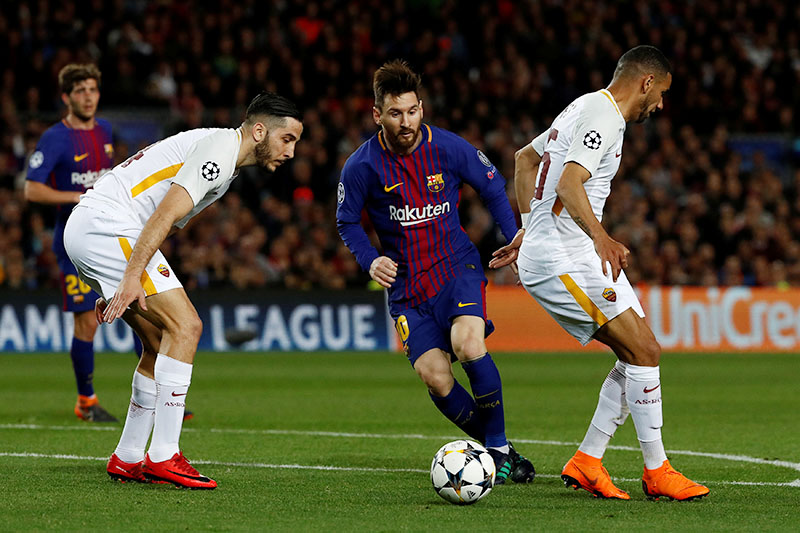 Barcelona's Lionel Messi in action with Roma's Bruno Peres. Photo: Reuters
ROME: AS Roma are refusing to give up the ghost in their Champions League quarter-final against Barcelona despite facing a three-goal deficit in Tuesday's second leg. Coach Eusebio Di Francesco pointed to their 3-0 group stage win over Chelsea as he insisted they can still recover from last week's 4-1 defeat, even though their opponents' superior pedigree suggests otherwise. But he said his side needed to show more guile and cynicism than they have been doing recently. "Why not believe until the end and hope we can achieve something unprecedented? We're trailing by three goals, so it's a really tough ask, but we have the duty to try," Di Francesco told reporters. "We're up against a machine... We must play with passion, heart and belief right up until the final whistle if we want to do the unthinkable." "Sometimes, we lack that craft and guile you need to get better results," he added. "I always want to see the right amount of cynicism from the team." Roma have reached the quarter-finals three times before and lost their last two, both to Manchester United in 2007 and 2008. The only time they made it further was in the old European Cup in 1984 when they beat Dynamo Berlin and went on to lose in the final to Liverpool. "We often speak about a winning mentality, but we've not won much at this club, so historically we haven't really had one," Di Francesco said. "You create a winning mentality through a sense of belonging, an identity, consistent work and sticking close to your surroundings." "Barca's strength has been built over many years, it's not happened overnight," he added. "Barcelona's strength comes from their mentality, which starts from the youth academy... They manage games superbly, using the ball well and making few mistakes." Barcelona themselves overturned a four-goal deficit in their last-16 match against Paris St Germain last season and coach Ernesto Valverde was taking nothing for granted. "The mistake would be to think that we are already in the semi-finals," he said. "It's true we got a good result in the first leg but nothing more. We have to play as if it's 0-0 because you never know what might go wrong -- a sending-off, or something. "We have to go out to win, nothing more than that."
#Barcelona #Champions League #Roma
You May Also like: